What is Tezos? A Beginners Guide

How Tezos is Revolutionising the DeFi Space

The decentralised finance (DeFi) industry is a thriving industry where more high-tech and next generation financial protocols are being built, providing DeFi users and investors a new way of investing and managing finance. There’s one protocol that’s reaching the headlines again: Tezos.

In this guide, we’ll explain in detail what Tezos is, how it works, and how’s revolutionising the DeFi space — especially with the emergence of booming technologies like Non-Fungible Tokens (NFTs,) decentralised applications (DApps) and Play-to-Earn (P2E) gaming.

Tezos is an open-source platform for building decentralised applications (DApps) and executing peer-to-peer transactions, and has its own utility token that powers the ecosystem, called Tez (XTZ).

Tezos is one of the oldest veterans in the DeFi industry. It’s backed by the Tezos Foundation, a Swiss foundation that supports the development of the Tezos protocol through grants and capital deployment vehicles.

The protocol was created in 2014 by husband and wife Arthur and Kathleen Breitman. Their mission was solid and clear: to create the “largest multipurpose and self-amending blockchain.”

Now what do they mean by “self amending?” The Tezos network is governed by its community of XTZ holders. Users stake (locking funds in a smart contract) their XTZ tokens in order to submit and vote on protocol proposals. If an amendment proposal receives a majority approval, then the software automatically upgrades the network.

In essence, Tezos is a community-governed ecosystem with a lot of use cases for DeFi users. Now let’s take a look at how it works.

Tezos and the Liquid Proof of Stake (LPoS) Blockchain

Tezos uses a variation of the Proof-of-Stake (PoS) consensus mechanism, called Liquid Proof-of-Stake (LPoS). It works similarly to traditional PoS networks: they rely on node validators to verify and process transactions on the network, creating new blocks and committing to the protocol’s security and, as reward, they receive a portion of the protocol’s native currency.

Unlike traditional Proof of Work (PoW) blockchains, a PoS system doesn’t consume an enormous amount of processing power, which produces massive energy emissions and it’s harmful for the environment. 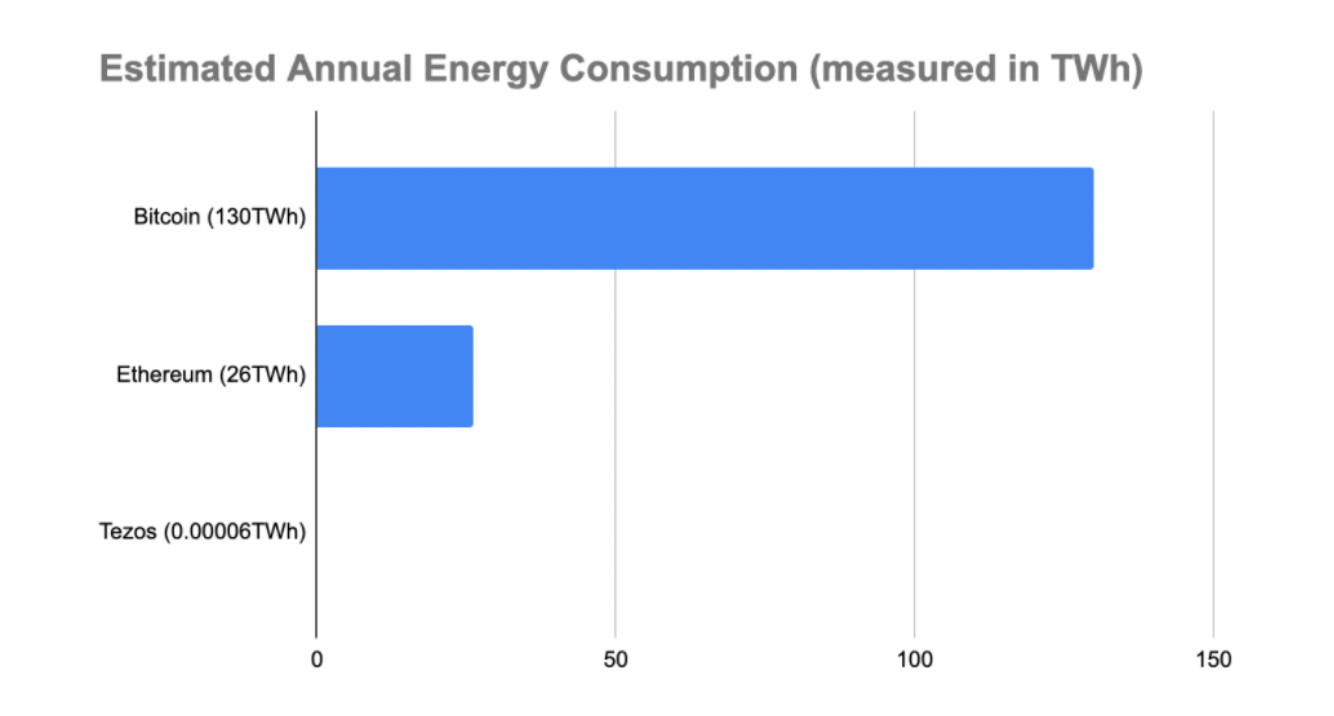 In contrast to other blockchains, Tezos consumes a minimum of roughly 0.00006TWh (Terawatt/hour). Source: Tezosagora.org.

Tezos was one of the first PoS blockchains to revolutionise the DeFi space with innovative network features and automated protocols that don’t consume an enormous amount of processing power.

Now what kind of style is the Tezos PoS system? There are two types of PoS consensus: Nakamoto-style PoS and Byzantine Fault Tolerant (BFT).

Tezos relies on the Nakamoto-style of doing things, meaning that the Tezos network chooses a random validator to run transactions depending on how many coins they have staked, hence the term Proof of Stake. In contrast, in the BFT system the validator is chosen by other validators via voting.

What makes Tezos a unique protocol is the self-amending properties. The Tezos protocol is divided into two key components: Shell and Protocol (also called “Proto” in the source code.)

There are other characteristics that make Tezos stand out from the rest. We can mention the fact that the block structure the Tezos network allows participants to edit parts of the code without compromising the rest of the components

Second, the capacity of the blockchain to update itself through the set of protocols mentioned above, which makes hard forks unnecessary. Forking a blockchain might be necessary when network participants become misaligned and never agree on protocol changes, but hard forks are always disastrous for stockholders and early investors.

Just like Ethereum is written in Solidity, Tezos uses Michelson, a low-level stack based programming language that allows to write, read, and provide formal verification of smart contracts.

What Can you do with Tezos?

Tezos enables several innovative features for participants, whether developers or investors. As a developer, you can use its software to create your own decentralised applications or run smart contracts — digital contracts made with code and deployed into a blockchain.

There are many things to do in the Tezos network. Besides being a reliable blockchain in terms of speed (Tezos processes up to 40 transactions per second) and security, you can also become a baker or a delegator.

Tezos has “bakers,” which are essentially the same as node validators —they take care of verifying, signing and producing new blocks on the Tezos blockchain. Bakers are a valuable part of the LPoS system because they make the blockchain run by validating transactions on the ecosystem. The safety of the Tezos blockchain relies heavily on their hands —they ensure all transactions in a single block are valid and in the correct order.

Anyone who wants to become a Baker must join the PoS consensus by staking a minimum of 8,000 XTZ, or 1 “roll.” The higher the number of rolls staked, the higher the chance of being selected to bake blocks. Bakers and general network participants are rewarded with newly minted XTZ to incentivize participation and a healthy competition among users.

Now if you don’t have 8,000 XTZ or you just don’t want to participate directly in the consensus protocol, you can delegate your funds to a baker and they will participate on your behalf. In essence, you’re “lending” your coins to the baker —this doesn’t give the baker the ownership of your coins, rather a higher chance of being selected to bake blocks, and you receive a percentage of the generated revenue.

As we said above, Bakers are an essential component of the Tezos blockchain. Besides their main functions, they also play an important role in the Tezos governance.

Tezos calls this a “self-amendment process,” which is divided into 5 periods.

The first process is the Proposal Period. As the title suggests, bakers submit their proposals to upgrade or amend the Tezos network. Bakers can only submit up to 20 proposals, and only ones with the highest votes move on to the next period.

Bakers vote on the proposals that reach a super majority in the previous Period. They have three options: “Yes,” “No,” and “Abstain.” If a proposal reaches an 80% majority approval, it moves on to the Testing Period.

The protocol will test chain the proposal to see if i) it works and ii) if it’s safe for the network to integrate it.

After the proposal is fully tested, then a Promotion Vote Period begins. Here bakers will have the final word if the amendment will be implemented.

If the amendment is adopted, then it enters the Adoption Period, but before it goes through a “cooldown” period in order to give developers extra time to adapt the codes of their DApps and smart contracts to the upgraded version of the infrastructure.

Tezos has its own utility currency — XTZ. It’s a multi-purpose and deflationary token with a current circulating supply of 879,626,362.98 XTZ.

There are a handful of things you can do with XTZ, besides trading or hodling. You can use it to:

Tezos and the NFT market

Tezos is also a thriving platform in the NFT industry, as more NFT artists and collectors are migrating to alternative blockchains with cheaper gas fees and higher throughput. To this regard, there are many NFT marketplaces built on Tezos, with Kalamint being the most popular one.

Not only financial institutions are becoming interested in exploring and adopting cryptocurrencies and blockchain technology — some video game developers are actively implementing blockchain to develop better in-game economies. Such is the case with Ubisoft, the first gaming giant that decided to adopt the Tezos blockchain to launch NFTs.

Even if you’re not a gamer, you may have heard of Ubisoft due to popular games in the industry such as Assassin's Creed or Prince of Persia. In December 2021, the gaming giant announced it will use Tezos to implement in-game collectibles minted as Tezos NFTs, starting with the popular video game saga Tom Clancy’s - Ghost Recon Breakpoint. After the announcement, Tezos’ XTZ skyrocketed 40%, while Ubisoft shares saw a 4% spike.

Users can trade NFTs in Ubisoft’s Quartz NFT, the decentralised marketplace created with Tezos last year. While still in beta, the gaming community is rapidly adapting to the NFT ecosystem.

The Future of Tezos

Tezos enjoys the fact that it has a very supporting community. It hasn’t always been like this, however, as in 2018 multiple differences between the founders and early investors turned into an endless spiral of lawsuits and legal disputes. In that year, the Tezos protocol had to suspend its debut because of this, but it then went live a couple of months later..

The popularity of Tezos has suffered due to these internal problems. In addition, the use of a single language can be the main drawback that can become an obstacle to scaling in the future.

Despite the controversies and internal conflicts, Tezos has been regarded by the majority of the crypto community as a remarkable and unique blockchain.

Tezos has been developed from scratch —it is not based on the code of one of the pre-existing blockchains. It’s not a fork, not a Layer-2 solution, but a proper blockchain that has a lot of room to work with and massive potential in the DeFi ecosystem.

Their goal is simple: to be the frontrunners of innovation with a blockchain capable of sustaining itself without risking its security, and without having to worry about dividing its community due to a hard fork.

If you enjoyed this blog to sign up to Blockchain Works, for more similar resources !