What is Ethereum 2.0 and What Does it Mean for DeFi?

Etherum is on its way to change the decentralised financial market with its ETH 2.0 upgrade —also called Ethereum Serenity, which will bring better network security, scalability, and a better overall user experience.

The upgrade, which is expected to go live by 2022, still has a long way to be fully implemented into the heart of DeFi.

Ethereum, the Pioneer of the Decentralised Market##

The Ethereum Network is home to the largest and greatest decentralised financial projects, with over 230 DeFi projects listed and over 200 built on it. Ethereum is one of the leaders in the blockchain industry as far as development is concerned, with a decentralised and programmable platform where anything can be created, from virtual reality worlds like Decentraland, Stablecoin projects like DAI, or decentralised exchanges like Uniswap.

Ethereum isn't just a currency. It is a whole ecosystem with a US$245 billion market cap at the time of writing, and it's in constant operation, uninterrupted and, at the same time, immutable.

It sounds like a great ecosystem for developers to build their projects and expand the decentralised financial market. There are, however, some perks that hold back Ethereum's full potential.

The Issues With Ethereum##

If you’re into the crypto space, you know the perks of the Ethereum network. Slow transactions (up to 15 minutes or more), low scalability, and high gas fees. The average transaction, ranging from 100 to 200 USD in February/May, could cost users up to 25 - 45 USD, while bigger transactions of 1000+ could cost around 100 - 125 USD.

Depending on market status, the higher the price, the higher the fees. Another problem is network congestion. High demand drives up transaction fees, making it expensive for the average user. As more people use Ethereum, the higher the disk space required to run an Ethereum client, which can lead to three problems:

Bitcoin is the precursor —the father of all cryptos, if you will, intended to show the world a new way to think about finance. Ethereum takes Satoshi Nakamoto’s idea and expands it by building a whole ecosystem for DeFi (decentralised finance) projects and upcoming potential cryptocurrencies also referred to as tokens.

Ethereum is intended to be a platform, not just crypto. This causes it to never be as effective as other blockchains, which is an advantage and a disadvantage at the same time.

With all of these problems in mind, Ethereum developers have been working on a solution they call “Ethereum 2.0” (also called Ethereum Serenity). ETH 2.0 has been in development since 2014 and represents a game-changing upgrade for the protocol, increasing its throughput —up to 100,000 TPS (transactions per second)— lower gas fees and more network security.

The essential difference between Ethereum and Ethereum 2.0 is the consensus mechanism. Bitcoin and Ethereum use the Proof of Work (PoW) algorithm, which consumes a lot of energy and makes it environmentally unfriendly —a reason why many investors and tech influencers have criticized it and denounced environmental consequences.

But once ETH 2.0 is finally deployed, Ethereum will move from a PoW system to a PoS (Proof of Stake). PoS protocols don’t require miners to produce new blocks. Instead, new blocks are generated through staking, which means becoming a node validator and actively participating in transaction validation on a PoS blockchain. 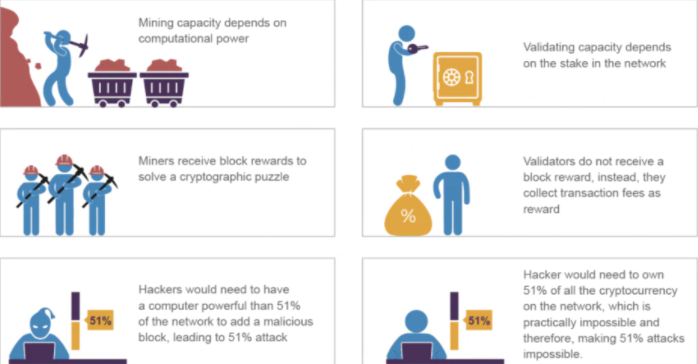 Staking Ether will be the main way to produce and validate blocks. The amount of Ether staked in ETH 2.0 deposits has surpassed US$14 billion in May, surpassing the team’s expectation of US$ 5 billion.

To become a validator, you first need to deposit 32 ETH to be eligible, which is around US$60,000 at the time of writing. By staking, you commit to helping the network’s security.

Over 160,000 active validators are operating on the ETH 2.0 Beacon Chain, which represents a 4% weekly increment, according to data from Beaconcha.in. These validators are selected when proposing a block according to their participation in the cryptocurrency and the time they have been investing in it.

The process hasn’t been perfect, though. Some validators have been slashed due to technical issues witnessed by the staking system. In February, 75 validators were ousted from the network, and eight more incidents followed later. Slashing occurs when the system punishes a user for malicious behaviour, usually downtime and double signing.

Slashing is a technique to keep malicious actors away from the network, typically built on PoS blockchains. It’s a mechanism designed to incentivize node security, availability, and network participation. There are two ways to lose Ether as a validator: 1) If the validator node is inactive for a long time, the amount of staked Ether will decrease and distributed to other validator nodes, and 2) If the validator node acts against the network, it will lose all the staked Ether and will be expelled from the blockchain.

The first phase of the ETH 2.0 upgrade is called Phase 0. This phase introduces the Beacon Chain, which is now live and integrates the PoS algorithm. The Beacon Chain conducts the sharded blockchains, and it’s home to ETH 2.0 stakers, running parallel to the Ethereum mainnet.

The Beacon Chain will merge with the mainnet, signalling the end of the PoW framework and making it responsible for randomly assigning stakers to validate shard chains. 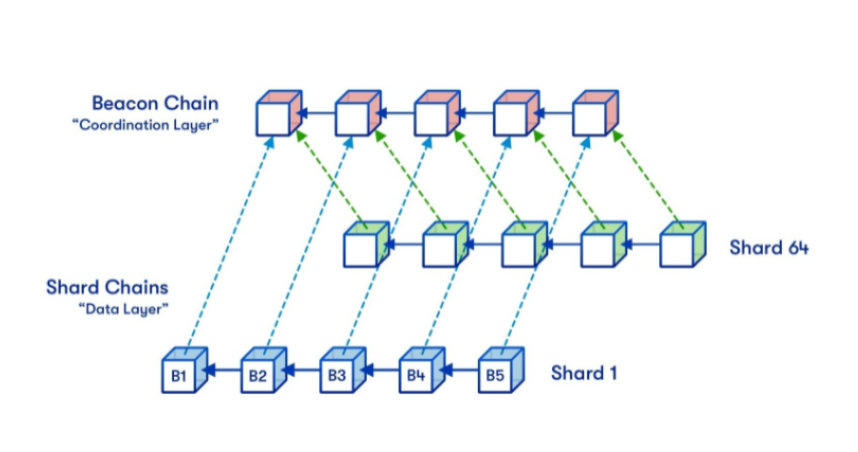 Phase 1 — Sharding Framework and the Merge

Phase 1 merges the independent components of the Beacon Chain and the Sharding framework and signals the first time that Ethereum 2.0 will be officially live. So what happens with the Ethereum mainnet? It becomes a sharded chain that will bring smart contract capability to the new system.

This phase is known as “The Merge,” representing the official switch to PoS consensus. It is estimated to be shipped in 2021/2022.

Phase 2 is the last and least defined stage for ETH 2.0. This is where developérs will test the network to spot any issues that arise on the network before it’s officially launched. We can’t put a deadline for the network’s official launch, but some experts suggest that as the Beacon Chain was launched in December 2020, the final stage for ETH 2.0 could take place around 2022 - 2023.

How Does a Sharded Network Work?##

A shard blockchain works relatively simple. Programmers break down a blockchain into several independent side chains that can communicate with the mainnet. This is called interoperability. In the case of Ethereum, the Beacon Chain will supervise the sharded chains.

Interoperability is necessary since transactions could take place between these small blockchains. Transaction validations will be carried out randomly by the different blockchains and added in blocks —both the transactions and the blocks will be reported to the other chains and to the Beacon Chain. However, this doesn’t mean it will be distributed.

At its core, sharding is a database partitioning technique that DeFi protocols and blockchain companies use to improve scalability, increasing its throughput. For instance, it’s expected that Ethereum could reach 100,000 TPS (Transactions Per Second) once the sharding process is completed.

Another aspect that sharding solves is network congestion. Sharding can reduce the latency of the main network since it splits it into different parts. By working independently from the mainnet, more transactions can take place without causing congestion.

Ethereum’s competitors are usually called “Ethereum Killers.” Various DeFi protocols are striving to become the leading scalable blockchain in the market, like Solana and Cardano, which are currently the two biggest Ethereum competitors.

Here are some of the main competitors of Ethereum:

Ether is a crypto that’s now on almost every crypto enthusiast’s portfolio because it is the currency that most altcoins demand you to invest in them. Secondly, few projects have as much support and study as the Ethereum platform.

Despite having strong competitors, we could think about Ethereum as a global supercomputer and the main hub for asset tokenization. Ethereum is frequently called the successor to Bitcoin, the only viable cryptocurrency, or even the Russian bitcoin. A lot has been said about Ethereum, but it represents a world full of possibilities without a doubt.

On June 4, SpaceChain, an open-source satellite network, launched the first Ethereum node into space to prove the full capacity of the Ethereum technology. The company conducted the first demonstration of the Ethereum blockchain into its hardware on the International Space Station (ISS), with a blockchain-enabled payload launched on a SpaceX Falcon 9 rocket.

Once the Ethereum node is activated, customers will be able to make enterprise business transactions and fintech applications. The first customer of SpaceChain to have access to the blockchain will be Nexus Inc., a digital asset management firm with offices worldwide.

“We launched a payload for bitcoin back in 2019 and today we are launching our second-generation payload with Ethereum. Bitcoin and Ethereum represent the two biggest ecosystems in the blockchain industry. With Ethereum’s smart contract platform running in outer space, it enables us to fortify blockchain applications and transactions with enhanced security and immutability, and allows more users and developers to get involved with our technology,” —said Zee Zheng, SpaceChain Co-Founder and CEO.

It all started with Frontier, the first release of the Ethereum Network. Frontier allowed developers to interact with the network, building ETH-based decentralised apps and tools. Once Frontier was proven to be successful, Homestead was released in 2015 —the second major version of Ethereum.

Homestead came with a few protocol changes like a command line interface and more stability. However, the bigger change came with Metropolis, which succeeded Homestead in October 2017. This version was the final phase of Ethereum before Serenity started in 2020 and delivered more features to the network, making it more user-friendly and opened the doors for tokenization and dApp development.

Now the crypto and the DeFi community are eager to know what will happen once Serenity goes live. Many expect a price increase due to high demand; others believe it will revolutionize DeFi forever.

Ethereum has an infrastructure that puts it in a very favourable position despite its setbacks. Other projects are already competing and are scalable and secured, but those so-called 'Ethereum killers' still have a lot of ground ahead to outrank Ethereum.

Everything is possible in a technological world in which tomorrow is late. Still, if the expectations of Ethereum developers are met, it is more than likely that it will not abandon its predominant position.

We are talking about one of the main engines of the DeFi industry, and many projects have managed to advance faster precisely thanks to its development. We can’t leave the massive amount of ERC-20 tokens out there, ERC-721 or NTFs (non-fungible tokens), whose main property is to be unique and exclusive and which, if we extrapolate them to the real world, may represent physical properties such as homes or any exclusive title.