Tron network is a blockchain-based decentralised protocol launched in 2017 by the Tron Foundation, a Singapore non profit organisation.

Tron didn’t seek to advertise any advances in cryptography or network design, and it went underlooked by the crypto community after its launch. TRON remained a rare project for the crypto community initially. Still, the protocol was well-known in the Asian continent as Justin Sun decided to launch an Asia-focused market strategy with the technical documents translated into several Asian languages, mainly targeted to crypto companies.

Things started to take off in 2018 when the Tron Foundation acquired BitTorrent. This acquisition came before the launch of a BitTorrent token, allowing Tron to advertise a new token to millions of users.

Tron’s whitepaper was heavily criticised for alleged plagiarism when researchers from Digital Asset Research (DAR) found several pieces of code copied from other projects in the Tron codebase —accusations denied by the Tron Foundation.

But what sparked heavier accusations of plagiarism was when Tron made its technological components compatible with Ethereum. Tron’s basic building blocks are the same as Ethereum, including smart contracts, dApps, and tokens. In fact, the TRX token had the ERC-20 standard before it decided to change it to its own independent peer-to-peer system (TRC-10).

Tron’s Architecture and Use Cases

Security and Delegated Proof of Stake

When it comes to security, TRON is similar to blockchain protocol EOS.IO and other high-performance blockchains, as it requires a minimum transaction fee to prevent Denial Of Service Attacks (DDoS) from malicious users.

Committee works similar to an on-chain governance system. The Committee modifies TRON’s parameters like block producing rewards and transaction fees. It’s composed of the 27 SRs, each and everyone having the right to submit proposals that are passed if they receive over 18 approvals from the other super representatives, becoming valid in the next maintenance period.

Super Representatives are witnesses, and they range from 1 to 27 witnesses. SRs are the only ones available to produce blocks, and are selected by TRX account holders through a voting process that lasts every 6 hours, so SRs may change every 6 as well. This, TRON believes, allows for a more democratized and decentralised system.

Witnesses from the 28th up to 127th are called Super Partner (SPs). Super Partners take care of receiving voting rewards without producing blocks or packing transactions. SRs and SPs are allowed to submit proposals to the TRON network in case certain parameters need to be changed or if the protocol requires parameter changes.

TRON has a reward system of 168 million total TRX allocated for its super representatives. According to the TRON documentation, SRs are rewarded with 16 TRX every time they produce a block. SRs take turns to produce blocks every 3 seconds. Rewards are sent to a sub-account in the super-ledge where SRs can view their TRX tokens but not make use of them. SRs can withdraw their assets every 24 hours to their specified crypto wallet.

Like Ethereum, Tron is an account-based platform. It has three different account types: Normal, Token, and Contract accounts.

Through this model the TRON protocol issues its cryptographic keys and controls the access to TRX and TRX token balances, then the network routes the exchange of data through a 3-layer architecture: Core Layer, Application Layer, and Storage Layer. 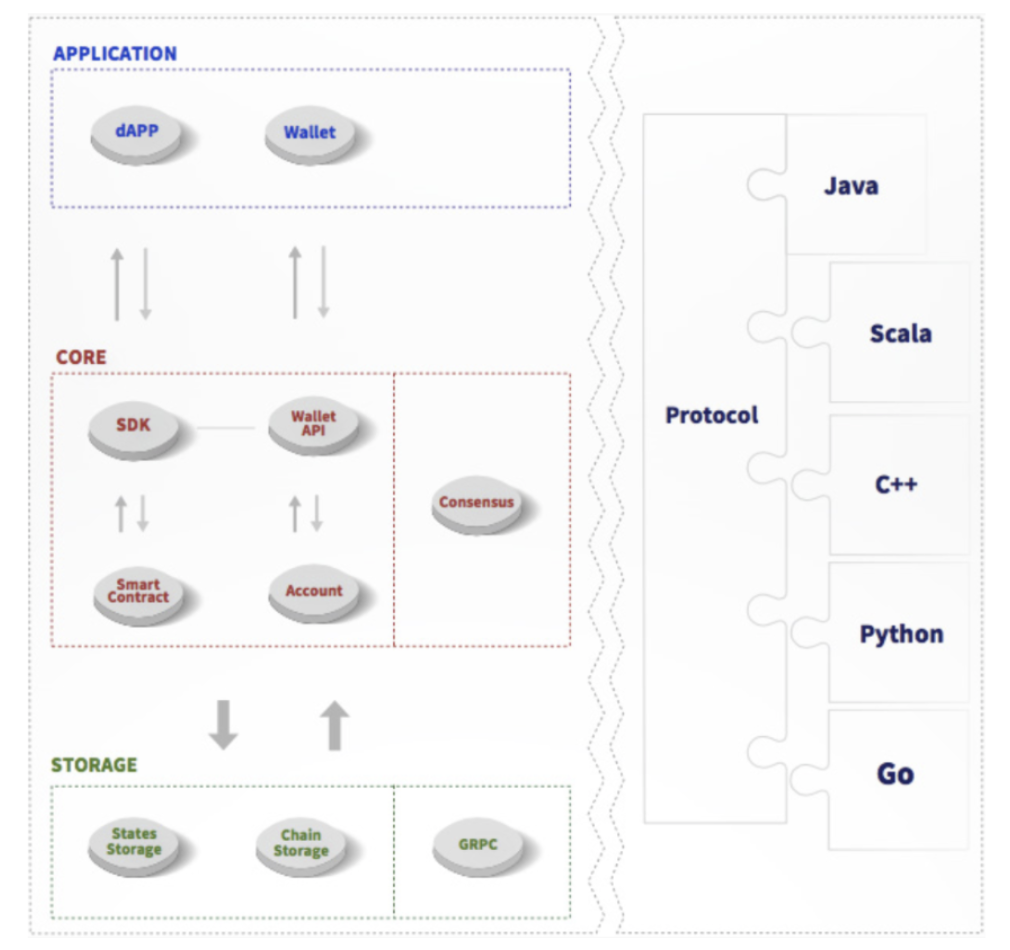 Tron is racing against some of the largest projects in the DeFi space at the moment, all of them competing to become the alternative solution for developers seeking a lower cost and scalable blockchain. To name a few:

Tron has its own token: TRX, or Tronix, the basic unit of accounts that powers the Tron blockchain. TRX transactions are free, and users pay content creators directly with TRX to access their applications. Content creators are not required to pay fees to TRON as the network was mainly developed to reward them. This way, content creators create their own media platforms and fully own them without needing third parties, allowing viewers to directly reward them for their content instead of relying on centralised platforms.

Like most PoS systems, TRON allows users to stake TRX, providing them voting rights and rewards in TRX. Users can stake TRON on mobile wallets by locking their funds in an account, and doing so provides the user with voting rights and TRON power. For every 1 TRX staked, users receive 1 TRON power —yet, if users unlock their crypto, they lose their TRON power and voting rights.

TRX can be bought on most cryptocurrency exchanges, including Coinbase, OKEX, Binance, or Huobi. Another way to receive TRX is to become a validator and lock your funds to receive TRX rewards.

Is TRON a Worthy Investment?

If we look at TRON’s network activity, we can see most of it is driven by gaming, gambling, and video streaming dApps. Yet, TRON is steadily growing its user base as more developers and traders seek alternative blockchains with lower fees and faster transactions than Ethereum. A month after TRON allowed support for USD Coin, its circulation on the TRON network surpassed $108 million, signalling the growing interest for alternative protocols. Ethereum high fees have become a problem for most developers, traders, and NFTs collectors. We’re already seeing an inflow of projects migrating to other networks like Solana (mainly NFT projects), Cosmos, or Cardano.