The term blockchain refers to a data structure that stores transaction data while maintaining safety, accessibility, and decentralization. It's also possible to define it as a chain of records maintained in the form of blocks that aren't controlled by a single entity. A blockchain is a decentralized ledger that is accessible to anyone on the network. It is impossible to reverse or modify data once it has been saved on a blockchain. On a blockchain, each activity is protected by a digital signature that verifies its legitimacy. The data saved on the Blockchain cannot be tampered with, and it is unchangeable. Blockchain is secure because it connects blocks using unique hash keys.

Importance of Blockchain in Healthcare

Since Blockchain can preserve an independent, decentralized, and open log of all patient data, it's perfect for security systems. Furthermore, while Blockchain is visible, it is also confidential, hiding any individual's identity behind complicated and secure algorithms that can preserve the sensitivity of medical data. Thanks to the technology's decentralized structure, doctors, patients, and health professionals can all share the same information swiftly and safely.

This article highlights the most innovative healthcare companies using blockchain technology to transform the healthcare sector for the better. 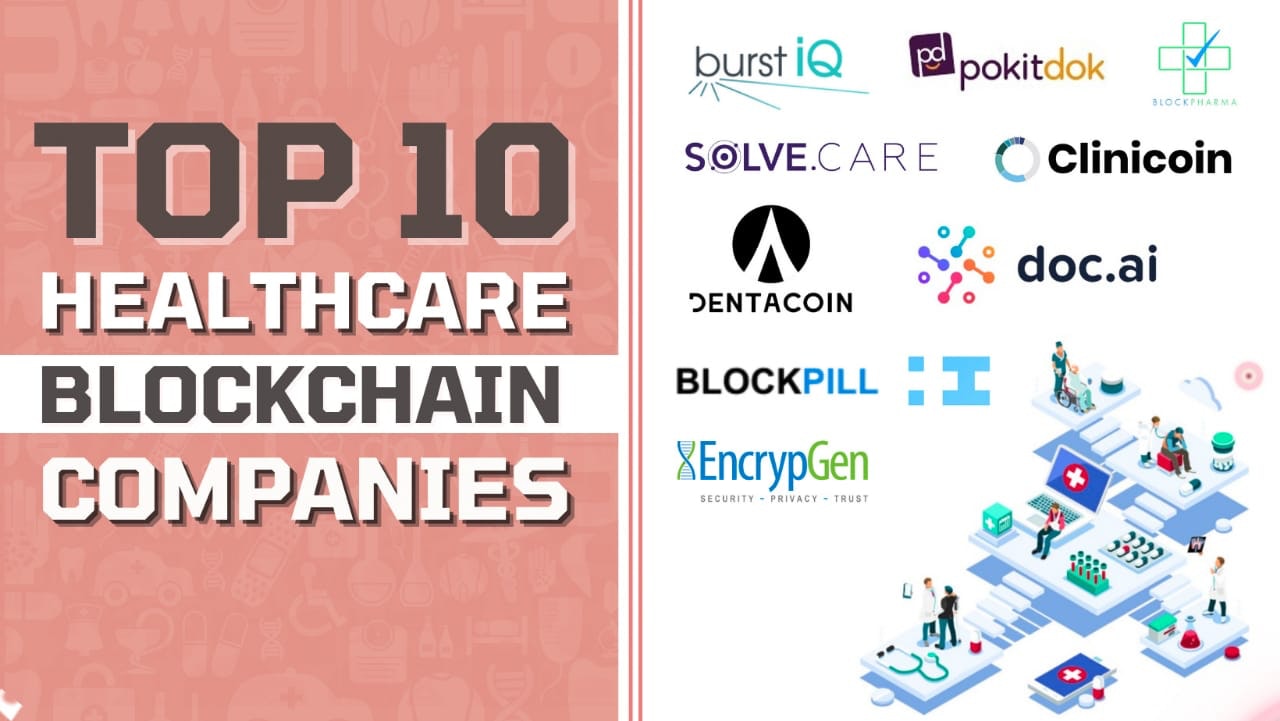 Healthcare companies that use Blockchain

One of the difficulties facing the health industry worldwide is the use of mediocre and counterfeit products. Substandard and counterfeit pharmaceuticals affect people in every country, but they are particularly prevalent in low and middle-income countries. Drug-resistant diseases and antimicrobial resistance are caused by poor and bogus pharmaceuticals, which result in over 800,000 fatalities per year. Blockpharma is leveraging blockchain technology to combat the global problem of counterfeit and inferior pharmaceuticals.

Blockpharma, which is owned by CrystalChain, a biotech firm based in France, has developed a blockchain-based application that allows customers to trace the legitimacy of a drug at the time of purchase. They created an app that monitors pharmaceuticals through the supply chain, from manufacturing to the end consumer.

Dental disease has a large worldwide impact, and Dental Care is expensive for individuals. In high-income states, dental Care accounts for a large portion of out-of-pocket spending, whereas many individuals in low- and middle-income countries cannot support it. Dentacoin was established to meet this obstacle. Dentacoin is a cryptocurrency based on the Blockchain that connects patients and dentists. It also encourages long-term dental health for patients rather than short-term care that necessitates regular follow-up visits.

It's a subscription-based platform that links patients with dentists and compensates them for their services. It also incentivizes patients to take good Care of their teeth and eat properly by giving them rewards in the form of "Dental coins." Through its dental health apps and games, it also encourages patients' long-term dental health.

The old population is expected to increase as global life expectancy continues to rise. Along with this growth, the number of people taking multiple drugs for various chronic diseases will climb. In that instance, the likelihood of drug-drug interactions is sure to rise, which is where BlockPill comes into play. BlockPill attempts to solve this problem by offering a system that ensures safer prescriptions and streamlines communication among the patient management team members. This will lower the number of unfavorable drug interactions and make it easier to change medications.

The human genome project's completion signaled the start of a new era in human genetics. Ever since, there's been a surge in curiosity in studying human DNA and genetics to develop long-term cures for genetic disorders. Encryption company Encrypgen is leveraging Blockchain to take this a step further. Encrypgen is democratizing DNA access for scientific research. They're doing it in such a way that the DNA's owners benefit from the use of their DNA in work, particularly research that could lead to the discovery of therapies for hereditary illnesses.

The rise of AI-powered medical devices that accompanied the internet-of-things revolution resulted in medical records fragmentation. Healthcare providers were no longer the only ones who had access to electronic medical records. Software corporations, smart devices, and cell phones have all become guardians of large volumes of patient data. Pokitdok aggregates this information for individuals who register to its Dokchain service, which employs blockchain technology. The company additionally protects these records by requiring double verification before seeing any patient's information. This information can be shared with healthcare providers, insurance companies, and other third-party entities.

Clinicoin is a blockchain-based community for health and fitness. It is concerned with its subscribers' well-being and connects them with suppliers while rewarding them for engaging in healthy activities. Clinicoin encourages people to participate in physical activity and mindfulness exercises to prevent diseases. Customers are rewarded with tokens when they register healthy actions on the Clinicoin app and verify them by third-party tracking apps connected to the business's app. It also gives developers who connect their health-tracking apps to their app the chance to be rewarded.

The fragmentation of electronic medical records complicates patient management. Patients frequently have to move their records from one physician to another on their own, which can be problematic. Rather than having patients' Electronic Health Records scattered across the internet, the IRYO network solves this problem by utilizing blockchain technology to store and connect them in a centralized manner. Patients can then pick who has access to their records, giving them partial or full view. Patients are compensated as well, as these suppliers are required to pay them 'IRYO tokens.' Patients can use these token to process payments given by the providers.

Overall, healthcare is prohibitively expensive. One of the causes for this is the high expenses of healthcare management, which are particularly high in America compared to other high-income nations. According to research, administrative expenditures in the United States averaged $2,497 per person in 2017, while admin expenses in Canada averaged $551 per person in the same year. Solve. Care intends to solve this problem by reducing administrative costs in healthcare by utilizing blockchain technology. To accomplish its goals, it employs a variety of technologies, including 'Care. Coins,' 'Care. Protocol,' 'Care. Cards,' 'Care. Wallet,' 'Care. Community,' and 'Care.Marketplace.' even though Solve. Care was created with the American healthcare system in mind; it is also beneficial to other countries healthcare systems. 'Care. Coins' can handle complicated healthcare payments, streamlining them and removing the requirement for third-party transactions.

Despite its simplicity, 'Care. Coins ensure that payments are precise and on time to guarantee seamless integration, the 'Care. Protocol synchronizes the other Solve. Care platforms: purse, cards, and currencies. Payments into the ' Care. Wallets' are made via 'Care.Cards.' They also ensure that different cards from other wallets are seamlessly integrated, ensuring the wallet's adaptability.

Doc.ai is a startup at the intersection of artificial intelligence, cryptocurrency, and medical software. This company uses artificial intelligence to consolidate medical services. Their customers can use the company's platform to willingly share personal medical and genomic data with researchers. This information can then be used for predictive modeling and other forms of research by scientists. Artificial intelligence has been used in collaboration with other companies to forecast the occurrence of allergic reactions. Doc.ai employs blockchain encryption to ensure the safety and confidentiality of medical data.

Medical data is being generated, shared, kept, and used at a previously unthinkable rate. Concerns concerning the safety and security of medical records have arisen due to this surge of medical data creation. BURSTIQ tackles these problems by utilizing blockchain technology to manage patient data safely and securely. Its ability to identify drug addiction early is one of its most important tasks. This is beneficial for recognizing, tracking, and avoiding opioid and prescription drug misuse. BURSTIQ is an important participant in the Big Data and Cybersecurity space and a firm to keep an eye on in the future.

New businesses are forming to improve on existing Blockchain-based healthcare solutions or to create whole new ones. The absence of availability, a shortage of infrastructure upgrades, societal injustices, and political delays are just a few of the problems these businesses will encounter. However, as we focus on the future, we are certain that the same bright minds and partnerships that introduced blockchain technology to the world will discover a way to make it accessible to everyone. In conclusion, the companies mentioned above are a few healthcare companies that have implemented blockchain technologies.