Introduced in 2008, blockchain is a system which records cross border digital transactions made in bitcoin and other cryptocurrencies across numerous PCs that are connected in a peer-to-peer network. In other words, a blockchain is a fast and secure way to buy and sell digital assets. The best part about a blockchain is that it provides supply chain visibility to suppliers and retailers. Moreover, blockchain systems are decentralized and implemented with open source software, in the sense that no government body regulates it.

The story behind how blockchain came into existence is quite interesting. Apparently, it is after the financial crisis that happened because of the corrupted corporates including the banks, the lenders and wall street that blockchain came into the picture. The aim of introducing blockchain was to replace banks with software and it is said to be initiated by “Satoshi Nakamoto” by launching a project called “bitcoin.”

Blockchain works using artificial intelligence. Each blockchain user is called a node and a node in the blockchain technology market initiates a digital transaction using its private key. The private key generates a unique digital signature and makes sure that no one can change it. Once done, the transaction gets broadcast to the verifying nodes. At this stage, the blockchain platform can use different methods to verify the validity of the transaction. If the transaction is found to be authentic, it will get a place in the ledger. It is believed that blockchain has the potential to revamp the stock market. Also, many organizations and banks have incorporated blockchain into their businesses.

Seeing the growth of blockchain and its growth potential, it would be interesting to learn which are the top blockchain companies to watch in 2022.

This article discusses ten companies that have proven to contribute significant value to the blockchain space and improve the maturity and professionalization of the industry by offering effective blockchain solutions. Let’s have a look!

Start your career at these leading blockchain companies!

Binance is the world’s leading digital currency exchange platform. The company provides a platform to exchange cryptocurrencies while taking care of liquidity and security. Founded in 2017 by Changpeng Zhao and Yi He, Binance is now one of the largest companies dealing in digital technology and finance with headquarters in George Town, Cayman Islanda, Malta and various other locations globally.

The company has a separate exchange in the U.S. by the name Binance US and is funded by 13 investors with Karnika Yashwant and Vertex Ventures Southeast Asia & India as the most recent ones. According to current data, the platform reports over 2500 employees working under it. According to data aggregation firm Growjo, Binance earns roughly $179 million in revenue annually.

We’ve all heard about Coinbase, the San Francisco-based crypto exchange, that went public on the NASDAQ exchange via a direct listing. It’s the first crypto project ever to get listed on a stock exchange, which is a remarkable achievement. This listing also shows blockchain technology’s importance and its intention to stay relevant for the foreseeable future.

Coinbase was founded in 2012 by Brian Armstrong (former engineer at Airbnb) and Fred Ehrsam (trader at Goldman Sachs). They wanted to provide users with an easy-to-use portal to buy and transact cryptocurrencies. At the time, Coinbase has become the largest cryptocurrency exchange in the US and has succeeded in its mission.

Coinbase estimated total revenue of $1.8 billion during 2021’s first quarter to give you some financial details about its magnitude. On top of that, the crypto exchange caters to 56 million verified crypto users.

Considering these numbers, Coinbase lists as the third-best crypto exchange for spot trading, according to CoinMarketCap.

For instance, Chorus One received a grant from the Celo Foundation and the Interchain Foundation to develop the building blocks to create an Inter-Blockchain Communication (IBC) module between the Celo blockchain and networks built on the Cosmos SDK.

Chorus One has established itself as one of the most trustworthy and professional staking and validator services in the blockchain space. They’ve proven that you can run a viable staking business. At the moment, users have trusted $1,659,144,530 worth of assets staked with Chorus One. Impressive!

It’s worth mentioning that they support a massive list of proof-of-stake networks. 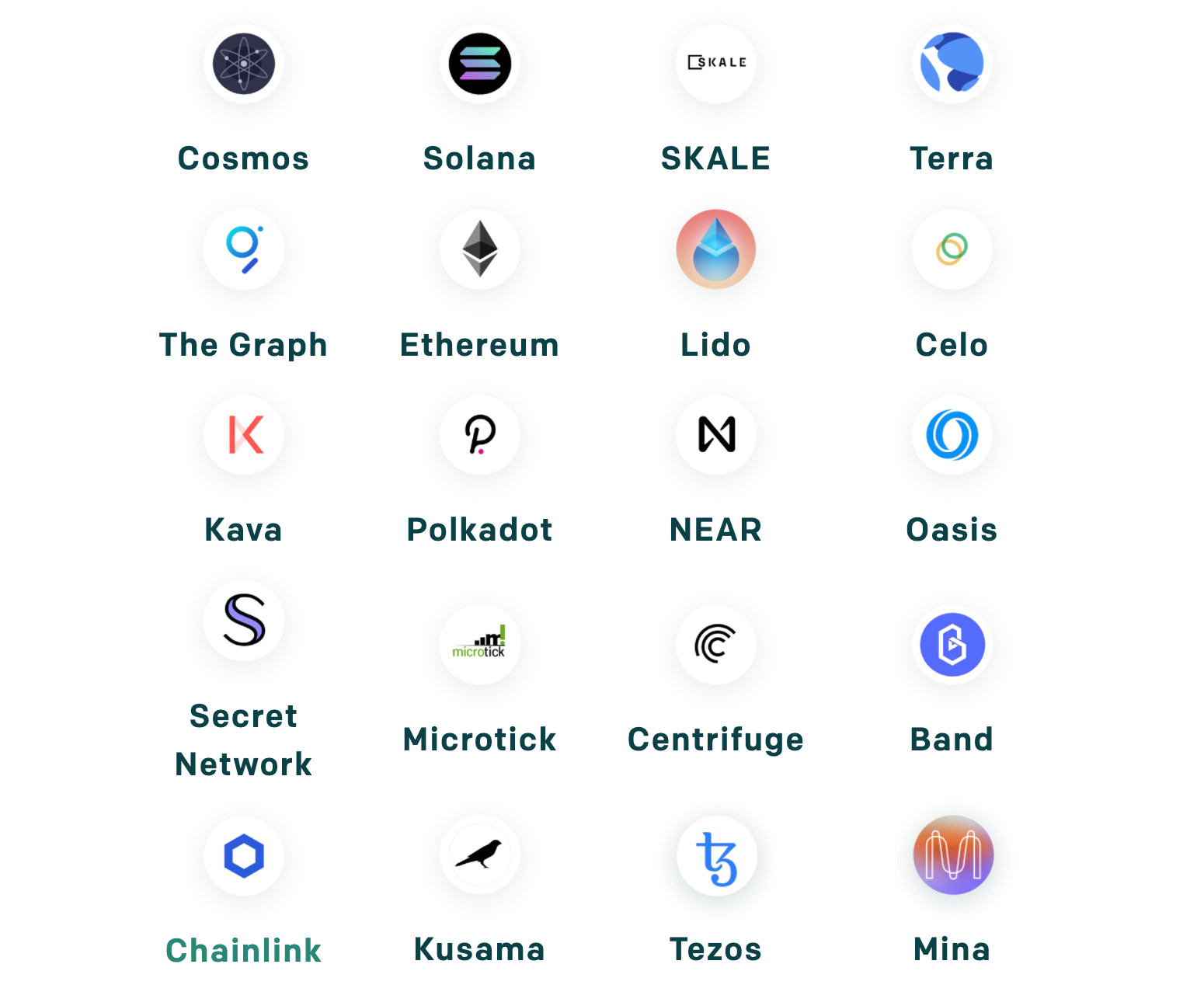 Chorus One is hiring! Take a look at their open roles here.

Synthetix allows developers to issue synthetic assets on the Ethereum blockchain. This is a compelling concept as you can transform any asset into a tradable asset while removing its potential restrictions.

Here are some examples of synthetic assets:

In short, Synthetix has opened up many new use cases for traders seeking new financial instruments. It wasn’t possible to employ trading bots to many traditional financial products to give you a concrete example. When trading synthetic assets, this becomes possible. In other words, the Synthetix platform brings non-blockchain-based asset exposure to the crypto ecosystem.

To explain why Chainlink has been such an essential company for 2020 and 2021, let’s look at what problem they solve.

First of all, smart contracts are by nature limited in what they can do. You can program business logic, but you can’t access any external data to influence their decision process. For instance, you want to create a smart contract that allows users to gamble on the current temperature at a particular location. To execute, this contract needs access to off-chain temperature data.

However, we can’t send an API request to a data provider that lives outside our blockchain ecosystem. A smart contract can only access data that lives within the blockchain ecosystem. The problem here is that off-chain data isn’t deterministic. All nodes within a blockchain network need to compute the same result to accept a smart contract’s outcome. Therefore, when one node sends a request only half a second later to a data provider, the data provider may return a different result. Now, the node may calculate a different winner for the gambling smart contract. In other words, off-chain data is non-deterministic.

Therefore, Chainlink created the concept of decentralized oracles that make off-chain data available to smart contracts in a deterministic way. To get back to the temperature example, let’s assume we have ten nodes that request temperature data from different data providers. Then, we calculate the average temperature, and we write this number via a transaction to the blockchain. Now, our gambling smart contract can access the temperature data and execute its logic without leaving the blockchain ecosystem.

Providing this service to many decentralized finance (DeFi) projects helped establish Chainlink as a dominant player in the blockchain industry. Even Synthetix, the project described in bullet three, makes use of Chainlink’s decentralized oracle technology.

Providing this service to many decentralized finance (DeFi) projects helped establish Chainlink as a dominant player in the blockchain industry. Even Synthetix, the project described in bullet three, makes use of Chainlink’s decentralized oracle technology.

Chainlink is hiring! Take a look at their open roles here.

Gemini is a crypto exchange founded by the famous Winklevoss twins in 2014. It’s a private exchange that also offers custodian services. The name Gemini refers to the Latin word for twins. The Winklevoss brothers have the vision of marrying both forms of money: fiat money and cryptocurrencies. They do this by offering various trading pairs where they map a cryptocurrency like Bitcoin against a fiat currency like the US Dollar (BTC/USD).

However, the Gemini exchange became famous for offering a first-of-a-kind custodian service for private investors. They hold customer’s digital assets in trust on behalf of the customer. Gemini can offer such a service because they are licensed as a regulated New York State Trust company. That means that they have to comply with banking standards and fulfill security standards. It’s worth noting that they offer $200 million in insurance coverage.

Being the first company to offer custodial services deserves them a spot on this list of top blockchain companies.

Gemini is hiring! Take a look at their open roles here

Circle brands itself as the payment infrastructure for internet businesses and are active in the crypto space since 2013. They are the company behind the popular stablecoin USDC, with a market cap of $11,241,731,453. The USDC stablecoin has its value “pegged” against one US Dollar. It means that Circle holds $1 in collateral for every USDC token they issue. It’s one of the most widely adopted stablecoins besides Tether (USDT).

To spread USDC’s usage, the stablecoin runs on the Ethereum blockchain and works with the Algorand, Solana, and Stellar blockchain.

Circle has been a crucial player in the adoption of cryptocurrencies by companies. They provide a wide range of API and integration solutions for businesses to adopt cryptocurrency payments in their applications.

You might wonder why companies would want to adopt stablecoin technology? They provide companies the stability of fiat currencies with the properties of digital currencies like Bitcoin. You can transfer large sums of money within seconds across the globe to anyone or anything while paying a small fee for doing so. Not to forget the secure money transfer blockchain technology enables. 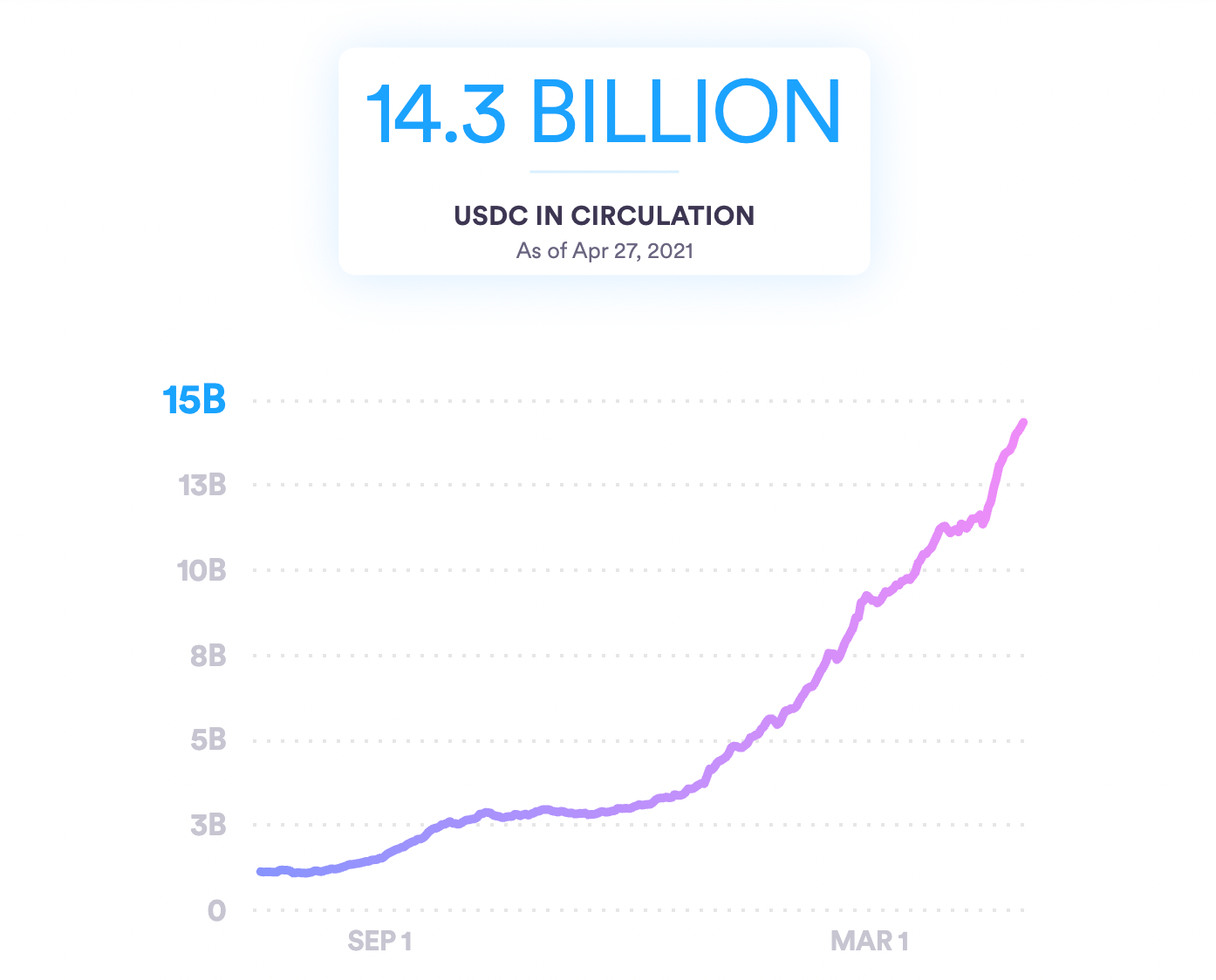 Steem is a blockchain company providing services to social media users, developers and entrepreneurs. Founded in 2016 by Ned Scott and Daniel Larimer, the company launched the Steemit social media platform as its first application built upon the Steemit blockchain. On Steemit, anyone can earn rewards by posting quality content, upvoting and investing in Steem-based currencies.

Steemit has three primary currencies, namely Steem Power (SP), Steem and Steem Backed Dollars (SBD). The company has its headquarters in New York and the United States with over 200 employees. As per the data aggregation platform Growjo, Steem is currently estimated to earn $24 million in revenue annually.

Argo is a publicly-traded blockchain technology company based in London, United Kingdom. Known for large-scale cryptocurrency mining. Argo Blockchain is the only blockchain company listed on the London Stock Exchange. The company was established in 2017 by Mike Edwards and Peter Wall with the sole aim of making mining a legitimate operation. In 2020, Agro Blockchain earned a revenue of $18.96 million.

Hive Blockchain Technologies Ltd. is a crypto mining blockchain company that claims to use renewable energy for mining Bitcoin and Ethereum. The company is jointly funded by Genesis Mining and Fiore Group to provide robust blockchain solutions and accelerate the development of the blockchain sector through traditional capital markets and develop the leading listed blockchain infrastructure company.

Founded in 2013 by Olivier Roussy Newton, Hive Blockchain Technologies Ltd. is headquartered in Vancouver, Canada. In 2020, the company earned $33 billion in revenue, for a $9 billion annual growth.

You can find blockchain jobs at these companies and many more on Blockchain Works!

If you are interested in more companies that didn’t make it to the list, make sure to check out Consensys, Gitcoin, and the Ethereum Foundation.

See other articles by Michiel