Rust is a programming language that allows anyone to create reliable and efficient software. Rust is a foundational programming language that is open-source. Rust is focused on portability and speed, as well as memory security and concurrency. Designers utilising Rust are creating a wide range of new programming applications, including gaming motors, programme components document frameworks, and replication motors for augmented reality. As a result, an excellent assortment of Rust programming books is essential for learning Rust programming with suitable instruction. 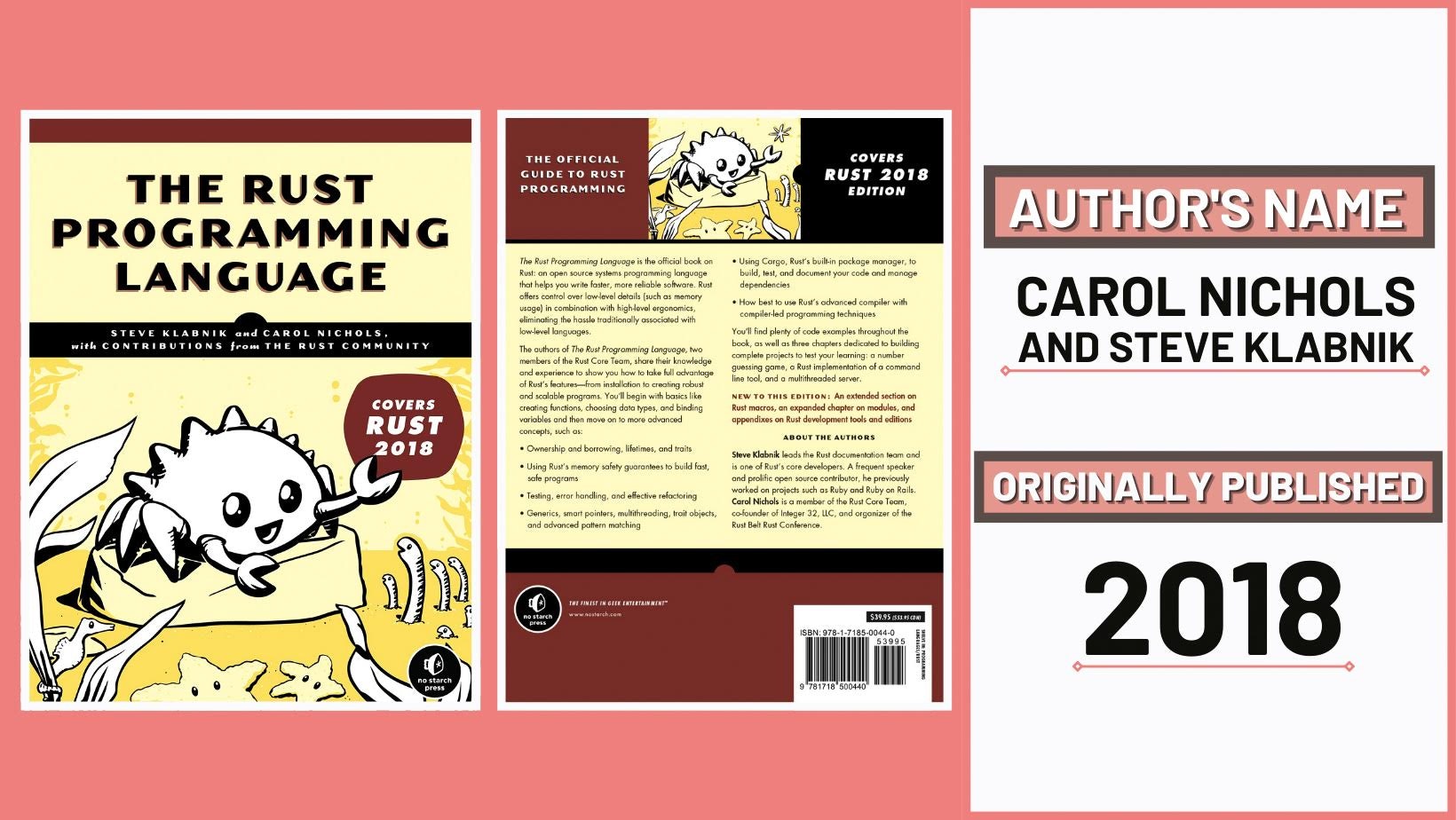 The official Rust book, The Rust Programming Language, published by Steve Klabnik and Carol Nichols, is dubbed "The Book" by the Rust community. This Rust programming language book begins with a practical project to help you grasp the fundamentals. You'll learn to write dependable, fast, and memory-efficient code while dodging the famed and arcane programming errors that plague systems programming. Pattern matching, iterators, and smart pointers are just a few of the topics covered in this thorough book.

2. Beginning Rust: From Novice to Professional 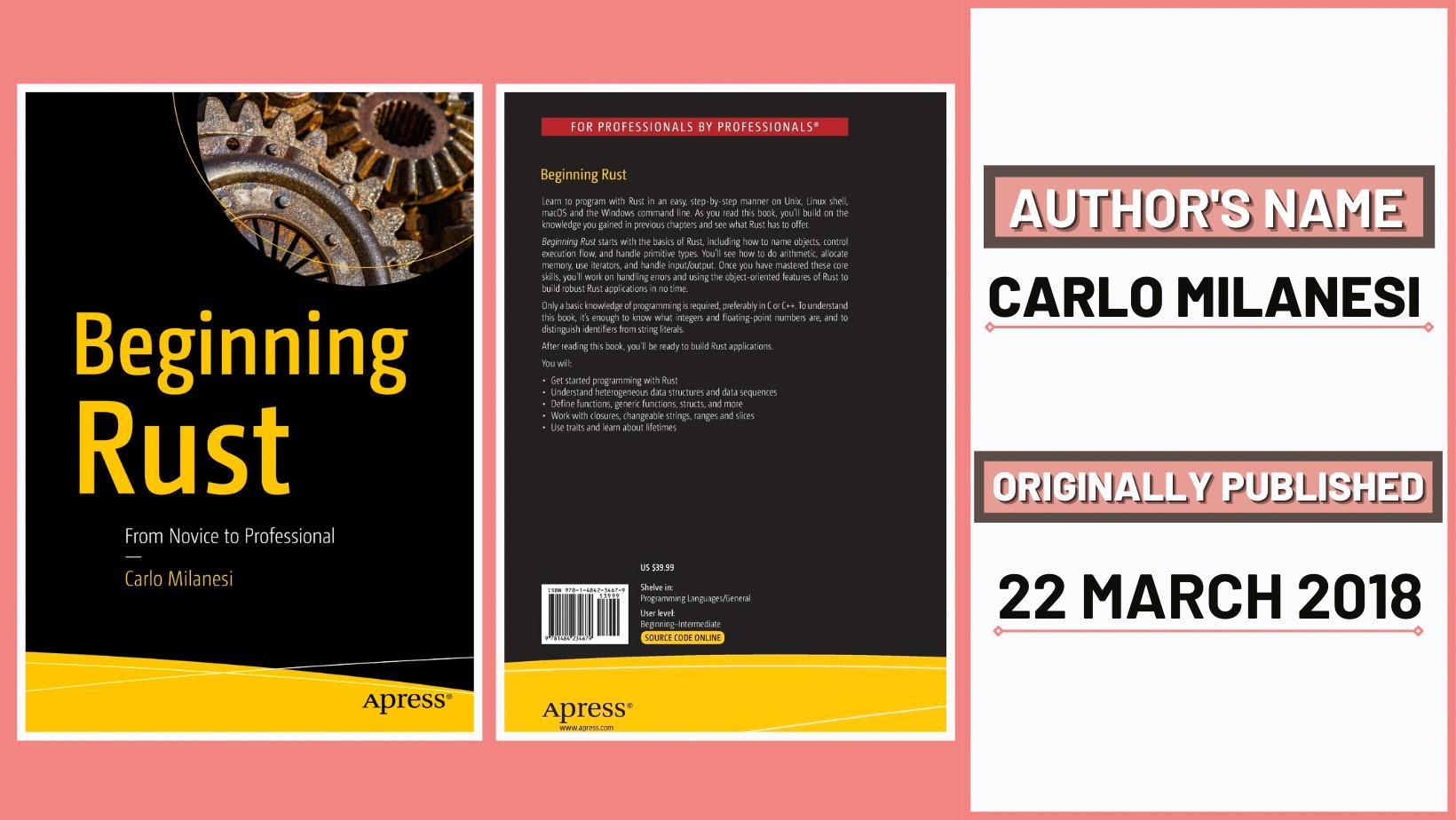 From Novice to Professional explains the fundamentals and best practices for learning Rust. The book takes a simple, step-by-step approach to help you develop your previous knowledge and explore what Rust provides. 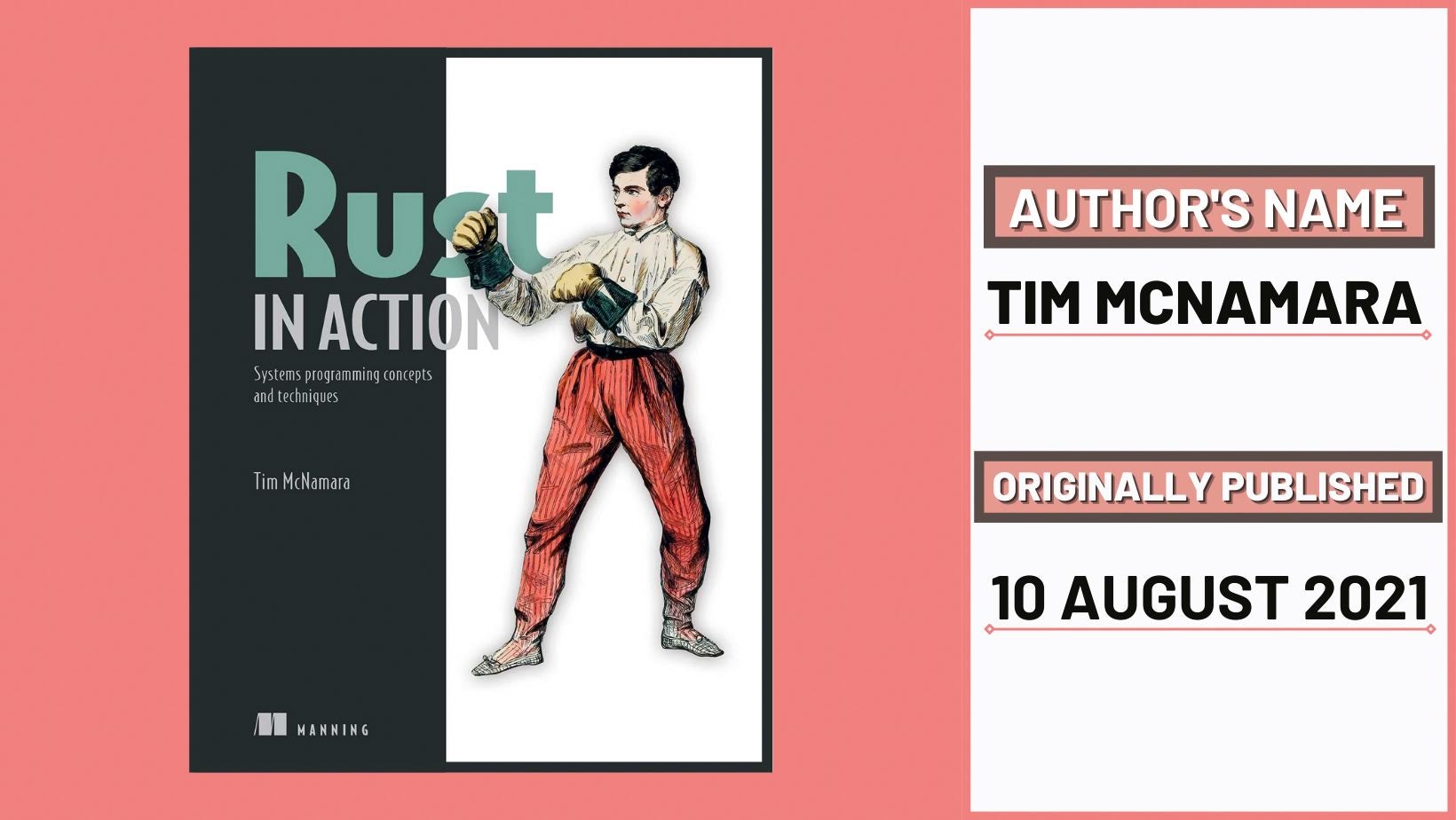 TS McNamara's Rust in Action contains everything you need to take active steps in programming in Rust. It explores a variety of systems programming topics and techniques before introducing the Rust programming language.

The book is presented in an interesting tone with clear, easy-to-understand examples that help readers get up and running quickly.

You can get the book here and get 35% off if you use the code nlfuncwrks21. 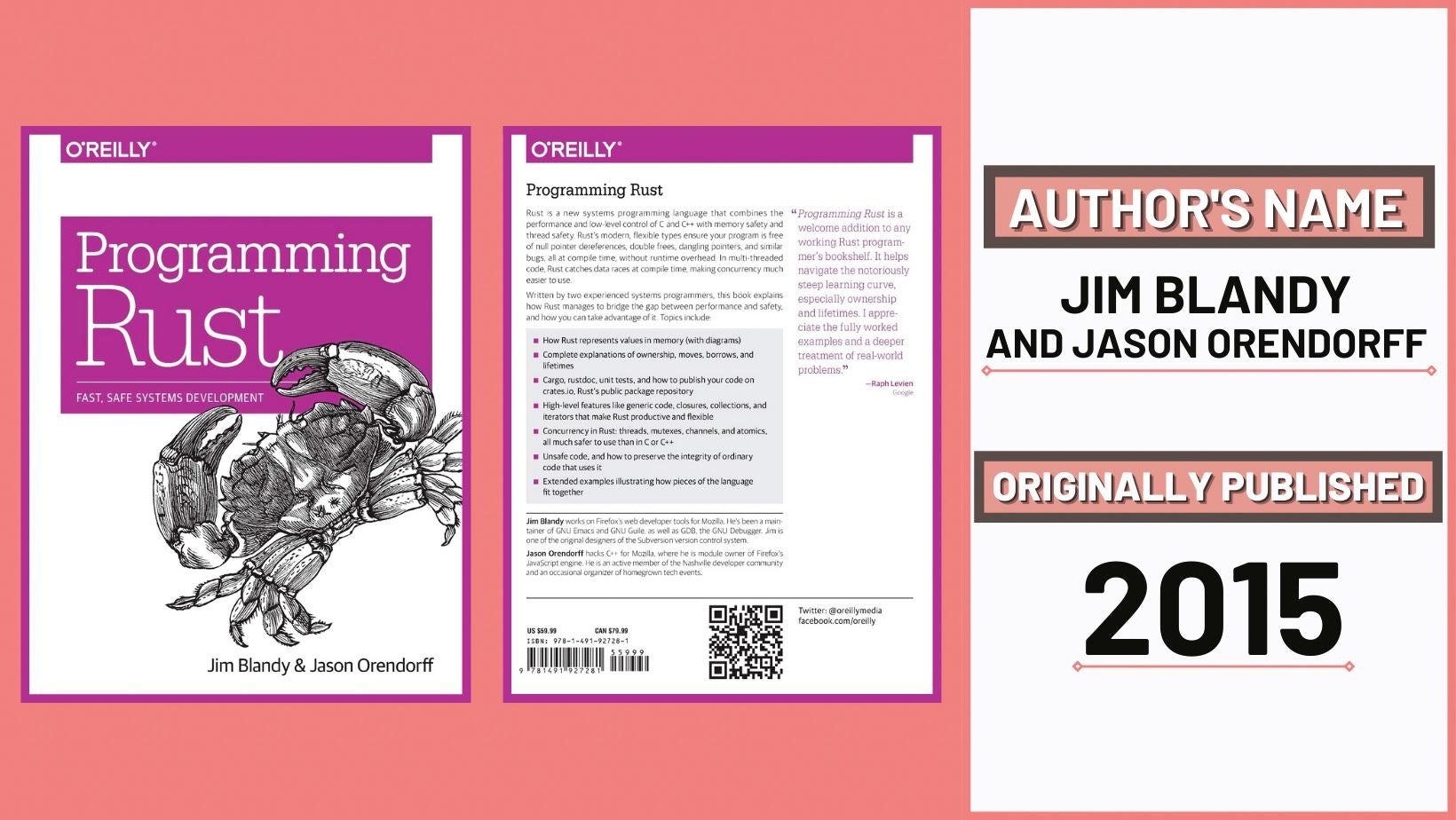 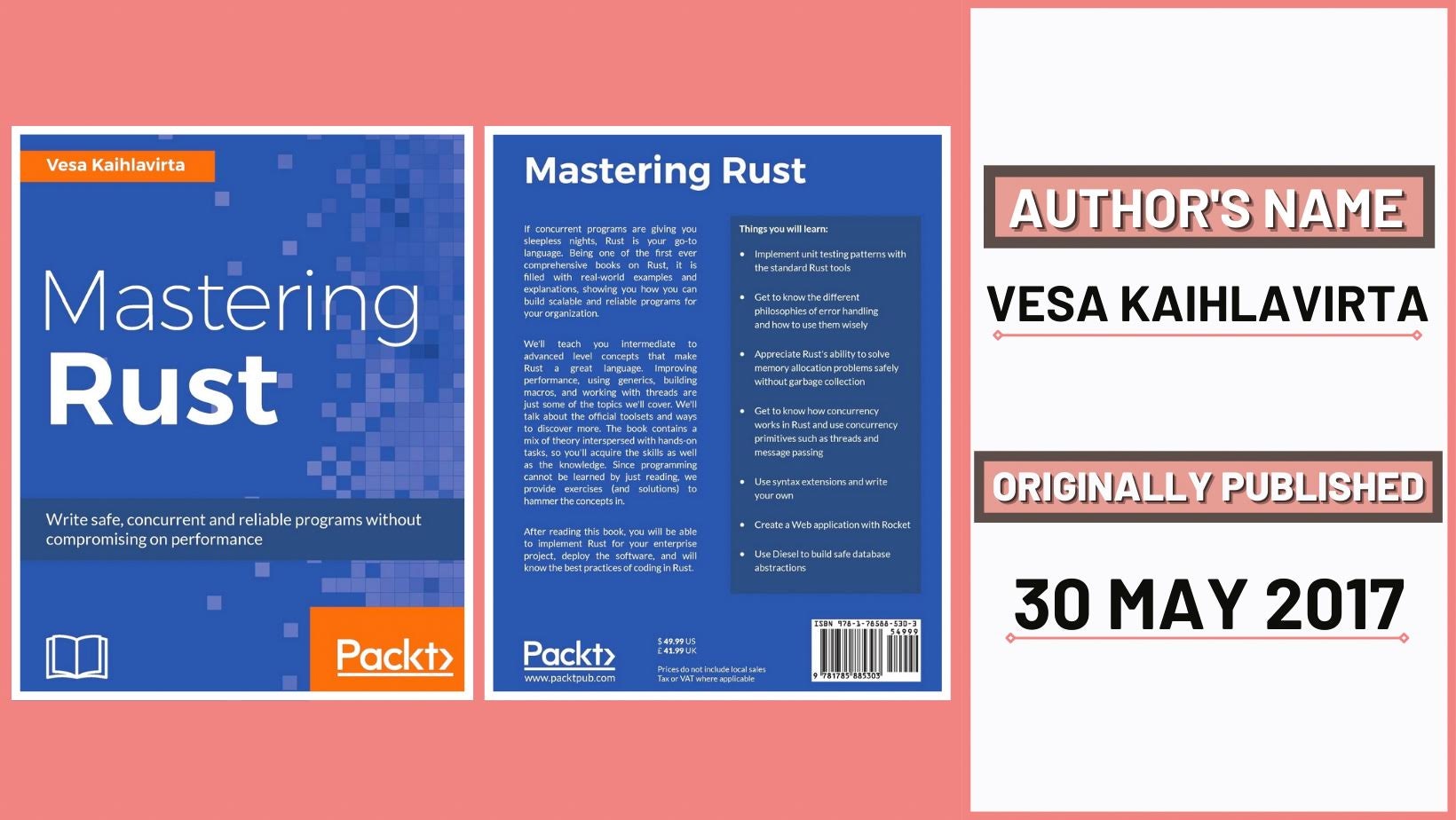 Working as a programmer in the rust programming area requires a good Rust programming book. 'Mastering Rust' is a book for rust developers at the intermediate level. People familiar with the fundamentals of rust programming can quickly pick up this book, which will guide them through the rest of their rust work. There are 14 chapters in this book. All of these sections have covered nearly all of the essential subjects for a pro-rust developer. Unit testing and benchmarking, error handling, concurrency, parsing and serialisation, debugging, and other subjects are covered. The best part about this book is that it includes exercises for each topic so that readers can practise utilising them. 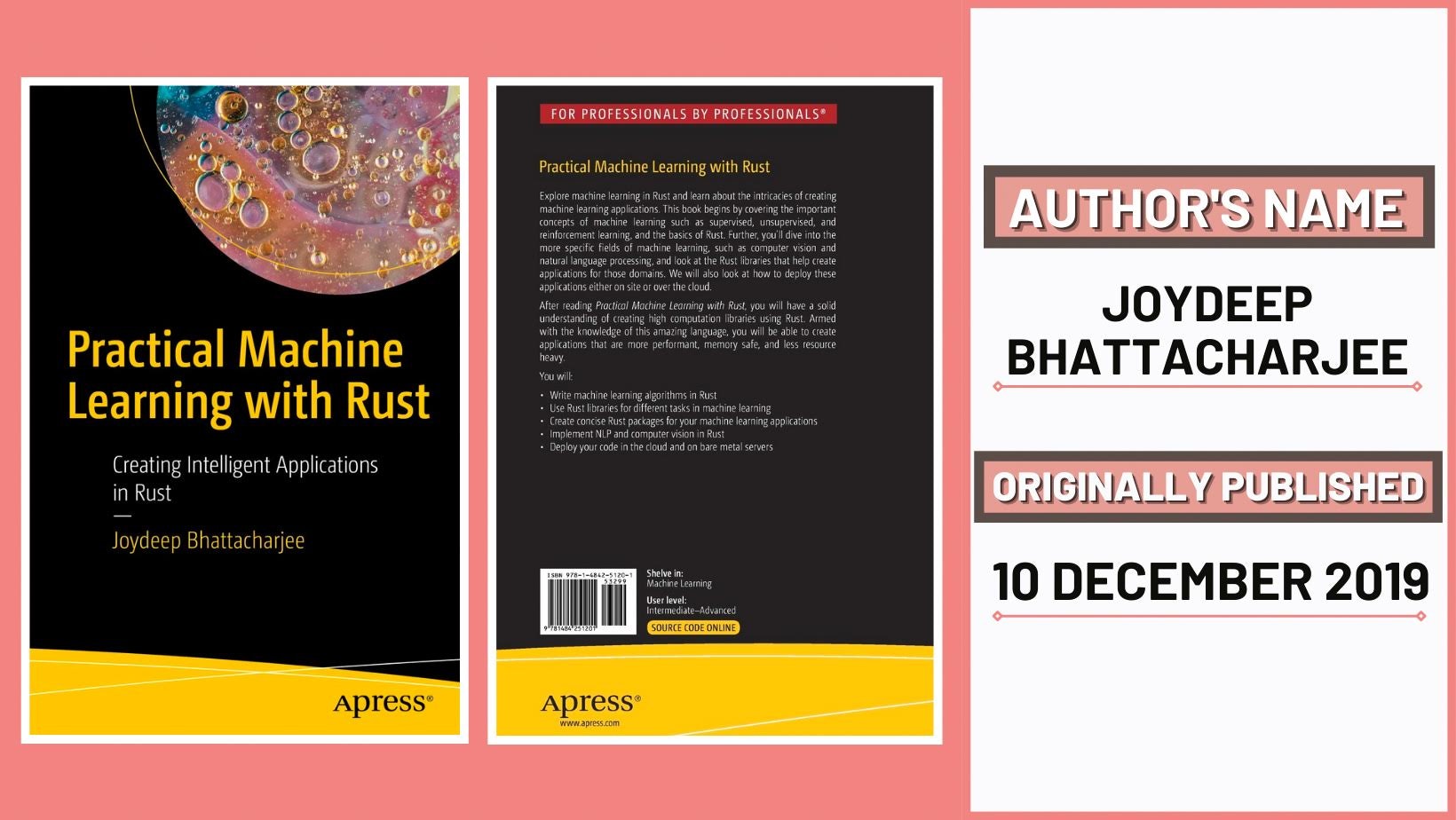 Rust programming encompasses a broad spectrum of software engineering subjects. Rust is a programming language that may be used for system programming, web development, application development, and machine learning, among other things. This book is ideal for developers that use Rust to work with machine learning. This book has addressed the subjects that will assist you in creating an intelligent application combining Rust and machine learning. There are eight chapters in this book. Some of them are the basics of Rust, Supervised Learning, Unsupervised and Reinforcement Learning, Machine Learning Domains, and so on. Several modest topic divisions might assist a user to comprehend the topics more thoroughly under these chapters. 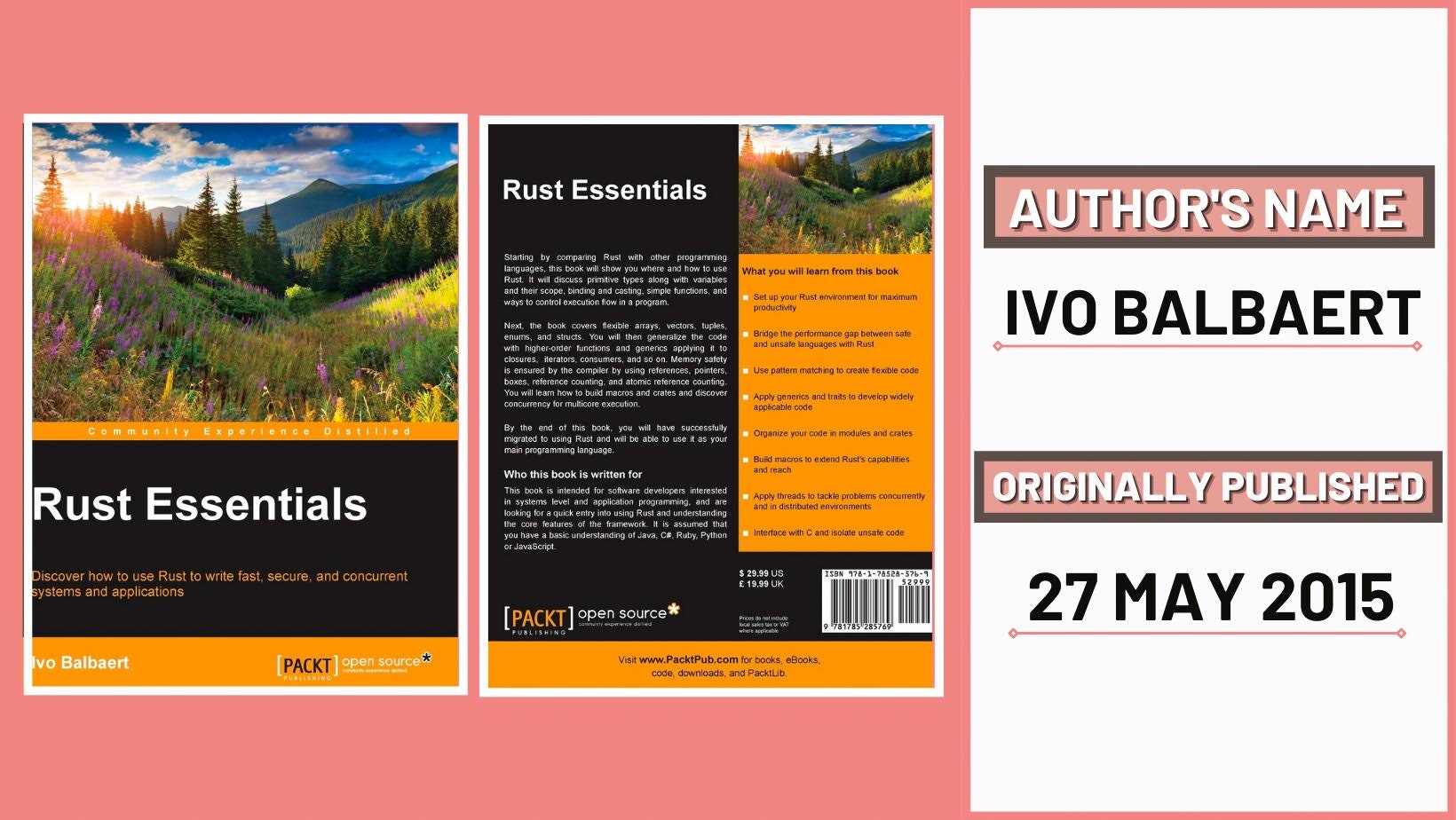 Rust is a system programming language that is incredibly efficient. It guarantees both great programming speed and programming reliability. 'Rust Essentials' is a fantastic book that will help you write faster and safer apps. This book discusses programming options while also laying a solid foundation for readers. There are a total of 12 chapters in this book. This book thoroughly covers topics such as Using Variables and Types, Structuring Data and Matching Patterns, Higher-Order Functions and Error-Handling, Ensuring Memory Safety and Pointers, and Concurrency — Coding for Multicore Execution. As a result, a system developer should buy this book without hesitation. 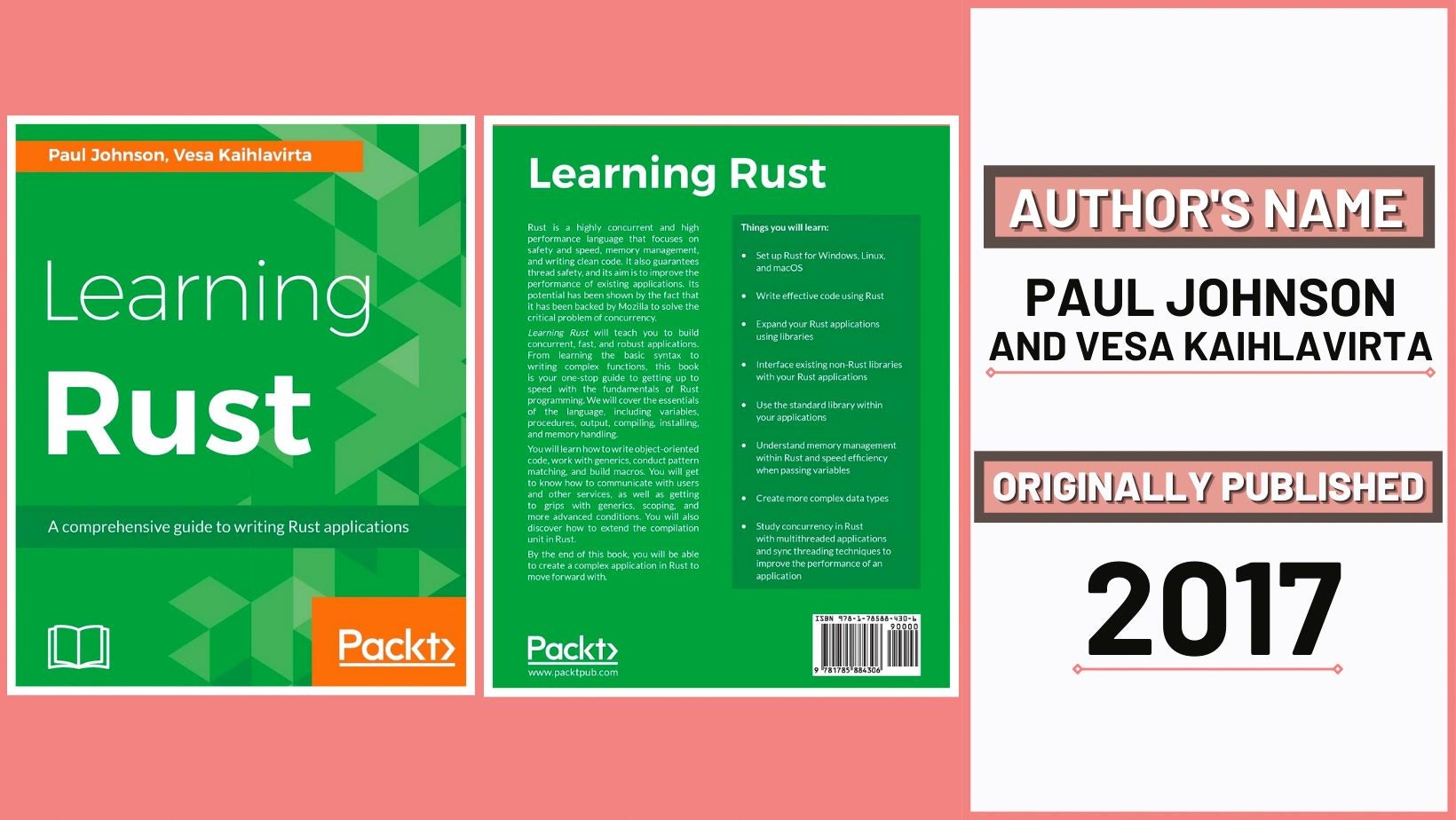 'Learning Rust' is a set of standards in the form of writing that guides a rust programmer through the process of developing a rust application. Rust ensures that the programme runs faster and more concurrently, so it is so important to learn and operate with. This book will undoubtedly make rust programming less challenging. The book is divided into fourteen chapters. These include Introducing and Installing Rust, Input and Output, Conditions, Recursion, and Loops, Creating Your Own Rust Applications, and The Rust Application Lifetime, among others. So, whether you're a beginner or an intermediate learner, you'll find this book to be extremely useful in your rust journey. 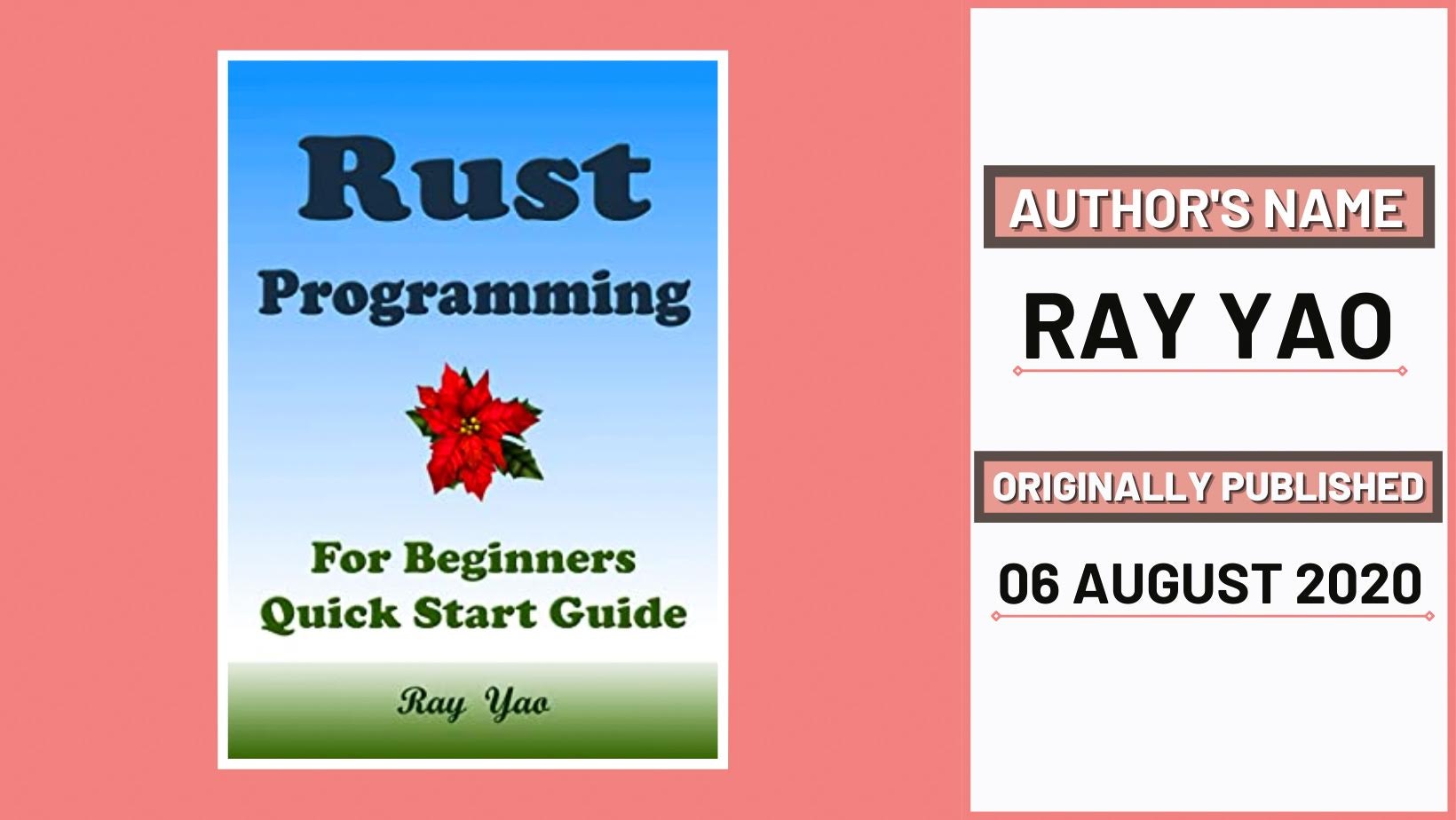 'Rust Programming' is a beginner's guide to learning rust programming. This book is intended to provide a beginner with a basic and rapid introduction to rust programming. The authors have attempted to construct this book with the very start and basic level contents; this is a fundamental level book. People who are unfamiliar with Rust can easily take their first steps with it. 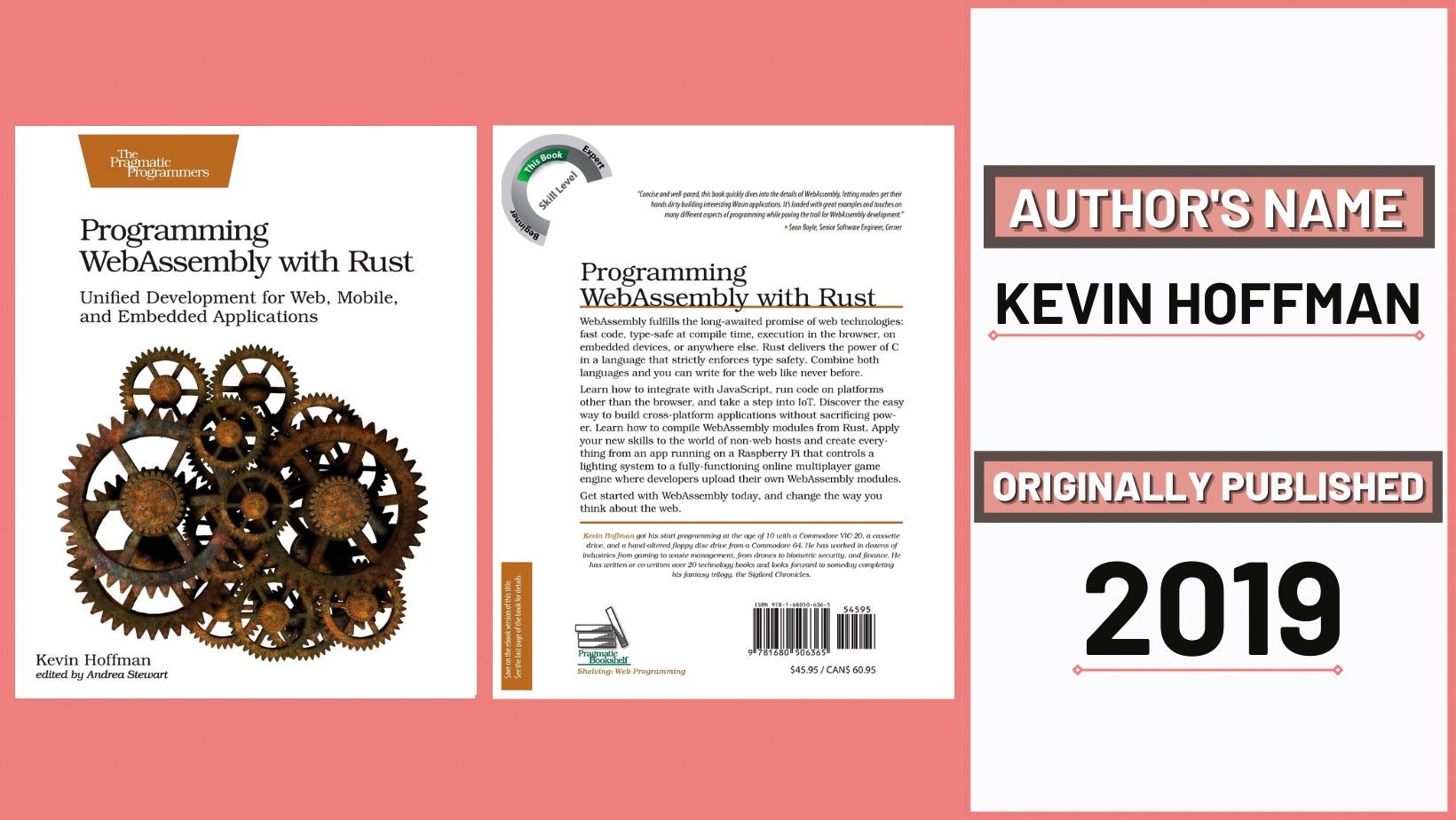 Rust is a programming language that may be used for system programming, web development, game development, and application development, among other things. This is a must-have book for anyone working as a developer in these fields. Though it is still under production, this book has been meant to be a fantastic resource for Rust programmers and novices.

Rust is a highly concurrent modern language with a rapidly growing network. If you want to expand your programming language knowledge and seek a new language to learn, Rust is a great option. Another reason to learn Rust is that it allows for efficient memory management.

This list of Rust programming books should help you to quickly master this language.