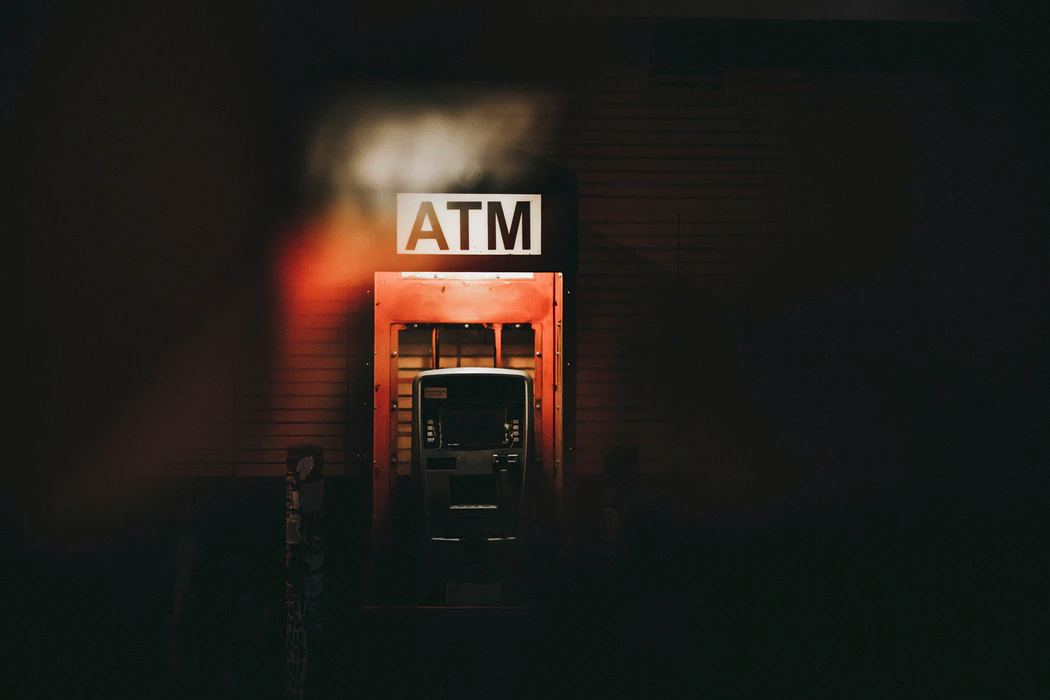 As an electrical engineering student, I learned to love state machines. Designing and implementing hardware systems is really hard. Once a system is released into the wild, your ability to "apply patches" to it is quite limited (I wish it could have been as easy as changing the code and pushing it to GitHub). For this reason, everything needs to be well figured out in the design, implementation and testing of the system, so that no changes need to be made. Here is where finite state machines can come in pretty handy.

A finite state machine (a.k.a. FSM) is an abstract model of the behaviour of a system. Modelling systems using FSMs gives a tractable way to reason about the design and operation of complex systems. It offers a way to predictively evaluate the behaviour of a system when it is in a certain state, and a specific event happens. State machine models are great to design complex systems that need to handle asynchronous inputs triggered by multiple sources, as they can be easily verified in a formal way. For all of these reasons (and probably many more), finite state machines are such a great tool to design hardware systems.

But FSMs are not exclusively used to design systems with some kind of hardware component (an environment where inputs may be naturally asynchronous), they can be found anywhere. Finite state machines are used for small embedded systems (like your alarm clock), in large systems (such as your city's traffic light network), in programmable circuits such as FPGAs (you'll see is really common to implement finite state machines over FPGAs using VHDL, something I extensively did in college), and in large and complex software systems such as a blockchain network.

Considering the ubiquity of finite state machines, I felt they deserved an introductory publication.

State machines can be of several different types, but the fundamentals of all of them are the same. State machines are composed of a set of states and transitions. The state is the status in which the system is in a given moment. The change of state (i.e. transition) of the system from one state to another needs to be triggered by a new input to the system (also referred to as an event). More formally: 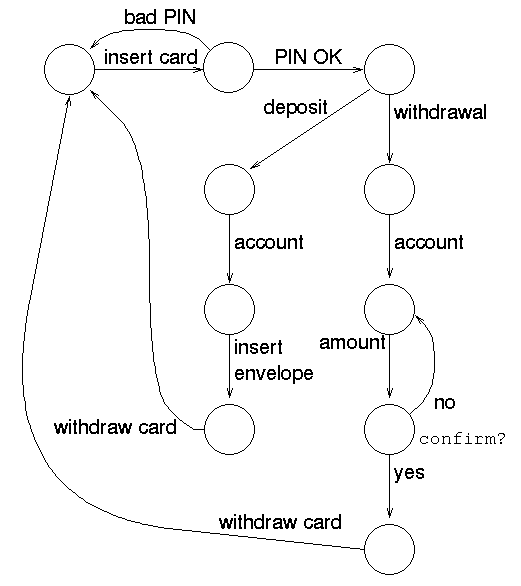 One of the main limitations of state machines, and one of the reasons why they aren't sometimes used in extremely complex and large systems, is what is known as the state explosion problem. The behaviour of the system may be such that adding a new aspect to the state machine multiplies the number of states that need to be modelled, and creates a disproportionately high number of transitions (an example here). Fortunately, there are already state machine proposals such as statechart designed to address this problem (but for now, let's focus on FSMs and leave statecharts for some other day).

Ok! I've convinced you that state machines are great. You are now planning to build your next big system as a state machine, what are the steps for this? The first thing is to clearly define what you want your system to do. Take a piece of paper and start listing all the possible inputs, states, and transitions of your system. With this in place, you can start painting your machine diagrams (the same way we did for the systems above). A great tool I use for this is mermaid, which allows you to paint these cool state diagrams using markdown-like language. Even more, you can use visual code's mermaid extension to instantly preview your diagram as you write (as shown in the figure below).

Your design is ready, time to start coding! You could build your own finite state machine framework from scratch to approach the implementation of the FSMs, but fortunately, a quick search online for "FSM framework in ", will return a good list of "ready to use" frameworks to implement finite state machines in your language of choice.

I will choose Go to guide you through the implementation of the simple turnstile state machine from above. This quick search for "FSM frameworks in Golang" throws results such as this simple package which is a great example if you, not only want to implement a FSM, but to understand how to build its internals; or this full-fledged package for the implementation of FSMs in Golang. Let's use this last one for our pet project:

After our description of FSMs the code should be self-explanatory. We first create a struct for the turnstile including the internal state (To, Profit) and the FSM. We define the events and transitions of the FSM in the events variable, and the callbacks for each of these transitions in the callbacks variable. The callbacks are the entry functions called when the machine enters that state. For every state change, we are printing the new state, and if the event was triggered by a coin, we increase the profit of the turnstile. Easy, right? Easy, but powerful.

At this point, you may be wondering, "wait, but one of the points you made in favour of finite state machines is that they are easy to formally verify their design". And that's right. In an FSM we have all the possible state, inputs and transitions of a system perfectly defined. We can port this design to a model-checker tool to run the system overall its possible states, transitions and inputs to double-check that the machine doesn't get stuck in a "weird state", or performs some kind of illegal state change.

In my biased opinion, the perfect tool to achieve this is TLA+. TLA+ is a formal specification language. It's a tool to design systems and algorithms, then programmatically verify that those systems don't have critical bugs. It's the software equivalent of a blueprint. By modelling your finite state specification in TLA+ you will then be able to run the model-checker to evaluate its correctness. You can follow this example to get a sense of how to specify and check a system using TLA+.

I get it. You are not an embedded system, rocket, or hardware engineer, why would you care about finite state machines? Well, let me share a real-world example of a complex software system in which many of its subsystems have been designed and implemented using FSMs: Filecoin. Specifically, two interesting subsystems in Filecoin are implemented using FSMs are: 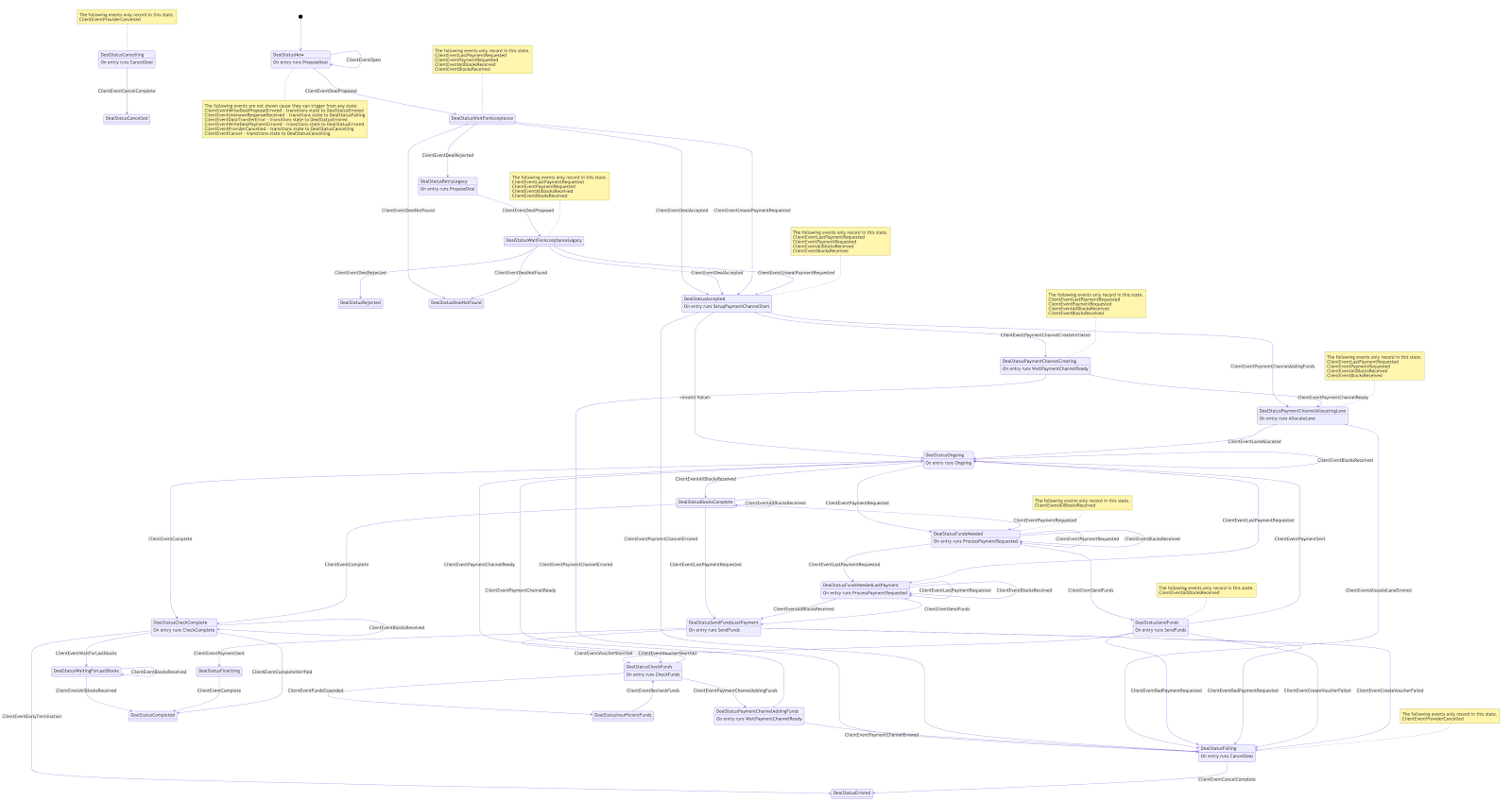 To ease the implementation of these design machines the filecoin-project came up with this framework that can be reused to implement these finite state machines in a nice way. You should definitely give it a spin for your first FSM as I did above.

And this is all from my side. I hope after reading this FSM becomes a new tool in your engineering tool belt. See you soon!

PS: Looking to paint your first FSM? Take a look at this tool.

See other articles by Alfonso