Cosmos Network is a decentralised protocol that serves as an ecosystem where several independent blockchains can scale and interoperate with each other. This way, users can swap tokens seamlessly through various blockchains and developers can build blockchains and dApps without the typical barriers of traditional blockchains.

The Internet of Blockchains

Online email services can interact with each other —you can send an email using your Google’s Gmail to someone’s Microsoft Outlook or Yahoo. If it weren’t for interoperability, we wouldn’t be able to do any of that. This is the problem with most blockchains nowadays, as they can’t communicate with each other without using a third party. Here is where Cosmos plays in.

Interoperability is technology functioning with other technologies. What Cosmos envisions for the future is a world where blockchains can freely interact with each other without risking decentralisation and sovereignty.

Several components and open-source tools make up for the Cosmos network and keep it running securely.

Layers: Cosmos has three main layers: 1) the application layer, which processes transactions and updates the network state, 2) the networking layer, which takes care of allowing communication across blockchains, and 3) the consensus layer, where nodes agree on the current state of the network.

Zones: each blockchain added to the Cosmos ecosystem is called a “Zone.” Each Zone is connected to the main blockchain, the Cosmos Hub.

Cosmos Hub: the first of thousands of blockchains added to the network, holding a primary token called ATOM (The protocol). Its main task is to interconnect other blockchains to the network without risking their security properties. Cosmos Hub also uses the Proof of Stake consensus, which selects network validators based on the number of tokens they hold.

BFT —Tendermint Byzantine Fault Tolerance: The Tendermint Core is a consensus that integrates the Tendermint Byzantine-Fault tolerance (BFT) algorithm. Its main task is to replicate an application on several machines. A fixed number of validators are required to run the software. Every validator is identified by their public keys, so there's no point to try to violate the protocol’s safety.

Cosmos SDK: a software development kit for developers keen to build their applications on top of Tendermint-based blockchains.

Inter-Blockchain Communication (IBC): the IBC is an end-to-end software protocol that allows interoperability between heterogeneous blockchains by specifying a set of data structures, abstractions, and semantics. The protocol can be used to build cross-chain applications with a wide range of features, like atomic swaps, multi-chain smart contracts, and token transfers.

Stargate Upgrade: a set of upgrades that make interoperability possible thanks to the IBC protocol. Since its announcement, Stargate has brought numerous automatic upgrades, the Software Development Kit, and efficiency gains of 100x.

Cosmos was founded in 2014 by Tendermint (All in Bits, Inc), a blockchain company and software engine created by developers Jae Kwon and Ethan Buchman.

Buchman met and joined Kwon in 2014 in a blockchain conference to build Tendermint and several other projects, including Cosmos. Both founders left Tendermint —the company is now spearheaded by Peng Zhong, a software developer with a background in front-end engineering and interaction design.

In 2017, the company hosted an ICO for the ATOM token, raising over $17 million in the first 30 minutes of the token sale. By 2020, the Cosmos official mainnet was launched, and a few months later, Kava Labs was one of the first projects created using the Cosmos SDK (Software Development Kit).

Some other innovative features came in 2020 when the Cosmos team partnered with Nym to bring anonymous credentials to its ecosystem. In 2021 Stargate was launched —a set of upgrades that will allow Cosmos blockchains to interconnect using the first standardized protocol for inter-blockchain communication.

ATOM is Cosmos's native and utility token. Like most PoS systems, holding ATOMS allows holders to pay for transaction fees, stake and validate blocks, and vote on governance proposals.

Spam prevention: Users can use ATOM tokens to pay fees, which can be proportional to the amount of power required to process the transaction, similar to Ethereum's concept of gas.

Voting: validators can vote on project proposals with their ATOM tokens and govern the Cosmos Hub. Validators are required to bind (lock) their tokens to be able to vote.

Staking: To stake, validators bond their tokens to earn block rewards. Bond means locking up tokens for a specific period to obtain voting power. Validators can stake ATOM if they are in a blockchain —a zone— connected to the Cosmos Hub. If a validator commits an infraction, like double-spending, Tendermint's For-Accountability consensus will slash the tokens.

Delegation When a validator delegates tokens to other validators, they are rewarded with inflationary ATOMs and block transaction fees.

Cosmos Network runs with an on-chain governance system conformed by a set of validators. They coordinate on-chain and off-chain to discuss proposals and implement protocol updates and constitutional amendments.

Every member has a voting right, but the protocol can suspend this right for a specific time if the member fails to vote on a timed proposal. This is a rule called Absenteeism Penalty Period. Moreover, a validator needs to deposit if he wants to submit a proposal. The deposit can be made with one or various tokens, including ATOM.

Buying ATOM is possible on most cryptocurrency exchanges like Kraken, Coinbase, or Binance. You can also receive ATOM as a reward by becoming a network validator. To buy ATOM, you can use your preferred exchange platform and search for the $ATOM token —keep in mind the Atomic Token and $CMOS are not in any way related to Cosmos Network.

Projects and dApps Built on Cosmos

Several high-profiles protocols have been built using Cosmos SDK. We can name a few of them:

What’s special about Cosmos is that it intends to tackle the maximalist idea that one blockchain will rule over all the others, and instead create a hub that integrates dApps and DeFi projects no matter what sector they belong to.

Just like Ethereum, users can build their dApps on the Cosmos protocol. But we have to stand out some differences —Cosmos enables the creation and deployment of dApps on its protocol with a PoS consensus combined with Tendermint BFT protocol, which, as we explained above, offers innovative approaches on how to regulate and secure the network if a members don’t follow the community’s rules.

Another aspect to consider is that Cosmos is more developer-friendly than Ethereum and older blockchains. Cosmos allows developers to build using their preferred programming language, unlike Ethereum which only supports Solidity to create smart contracts on the Ethereum Virtual Machine (EVM). The dApp exodus has reached Cosmos too —as gas fees and network congestion squeeze Ethereum’s capacity to meet the DeFi community demands, more projects and dApps are switching to alternative low-cost and high-performance blockchains, like Solana, Cardano, and Avalanche, and Cosmos has seen over 300 dApps migrate to the network.

While it doesn't have the recognition or capital of its rivals like Cardano or Polkadot, Cosmos is gaining track on the DeFi market and offers potential investment and developing opportunities for the DeFi community. Several crypto analysts forecast the ATOM token could become one of the most important assets on the market.

At the time of writing, the ATOM is up 23% on the daily chart, as per data from TradingView. 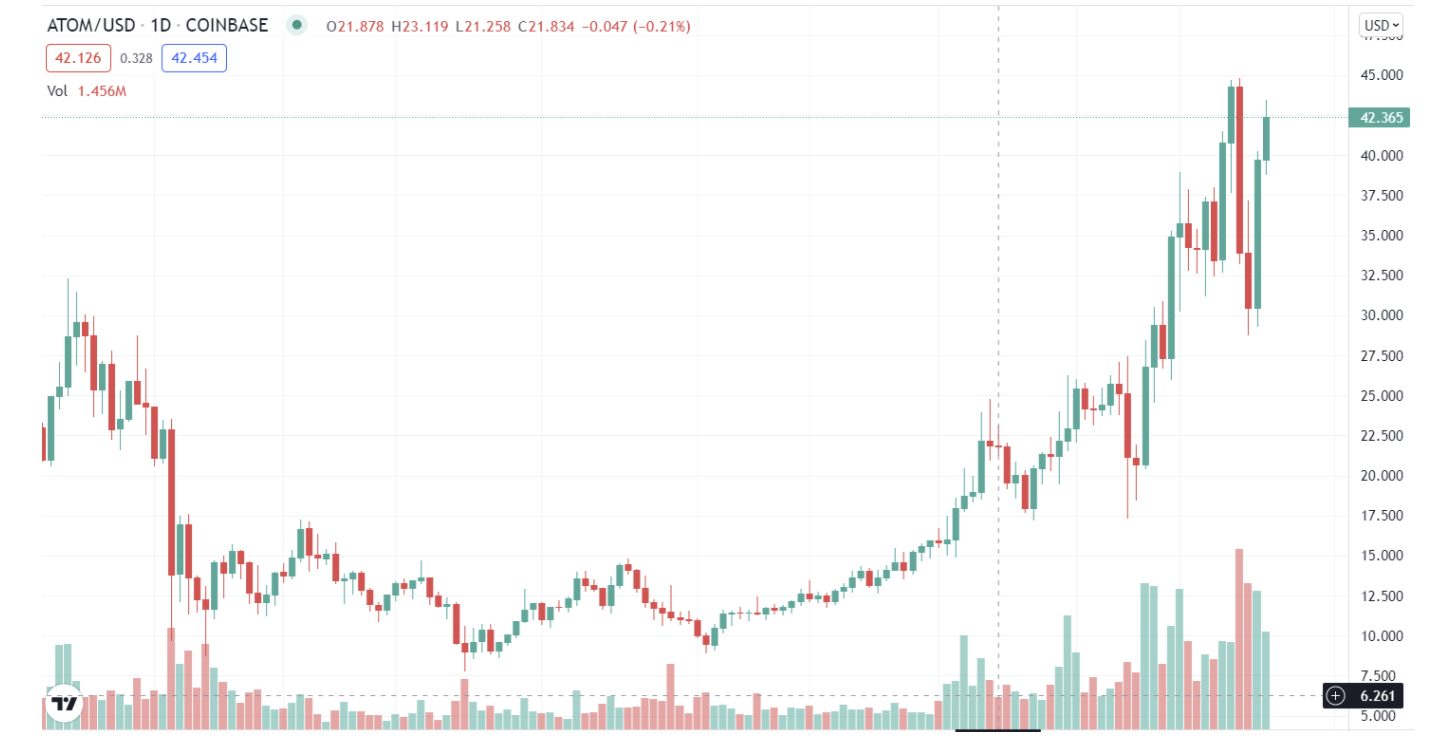 The growing interest for the protocol comes amid several network upgrades and promising projects.

The Gravity DEX (Decentralised Exchange) was launched in July this year, and it’s looking promising as it has secured $3 billion worth of digital assets and dramatically boosted the ATOM token’s price.

Gravity DEX is a cross-chain Automated Market Maker (AMM) that allows users to trade any token belonging to the Cosmo Hub. Something that called the attention of traders is that frontrunning is impossible thanks to Gravity’s batching technology. Frontrunning is the practice of placing an order with the knowledge of a future transaction, which has caused problems to platforms like OpenSea and Uniswap.

Cosmos’s Gravity is the back-end to various platforms. The primary platform leveraging Gravity is Emeris —the one-stop-shop for all dApps living on the blockchain connected to the Cosmos Hub. Emeris currently allows users to instantly swap coins to 9 different blockchains using the Gravity protocol and will add support for more blockchains in the upcoming months.

Emeris seeks to integrate all kinds of dApps and protocols, including yield farming to NFT marketplaces, payment processors, data storage, and more. The protocol was launched on the Beta version, focusing mainly on cross-chain DeFi.

Cosmos Network might be well-poised to gain more ground on the DeFi market and harvest institutional and individual capital as the protocol implements more significant upgrades. We can find more in-depth and technical info in the official whitepaper.