While Solana is not widely known in the crypto and DeFi community yet, many analysts think it offers innovative and more efficient features for users and developers in the field. With a US$35 billion market cap, Solana has the ambition to become a network that never delays through the integration of new and high-performance technology.

Anatoly Yakovenko founded Solana before working as an engineer at multinational Qualcomm, also having experience with file hosting service Dropbox. Yakovenko, together with Eric Williams and Greg Fitzgerald, started working on Solana in 2017, which was officially launched in March 2020 —under the Solana Foundation, headquartered in Geneva, Switzerland.

In 2017, Solana debuted via an Initial Coin Offering (ICO), raising over US$25 million through various private and public sale rounds. Solana became one of the fastest-growing ecosystems after its debut, attracting several high-profile crypto companies and institutional capital to its network including Multicoin Capital, CMCC Global, Chainlink, Serum, and more.

One of the most successful projects built on Solana’s blockchain is Serum, a decentralised derivatives exchange. Serum achieves low latency, low gas fees, and high liquidity thanks to its Solana-powered on-chain order book. The exchange grew 1500% since its Initial Exchange Offering and as Solana adoption increased by the first quarter of 2021.

Solana has a hybrid consensus model and several innovative mechanisms that keep the network running. Let’s take a look at its most important features:

Proof-of-History is Solana’s core. Yakovenko came up with the idea of creating a historical record that would speed up the network without risking decentralisation. Thus, PoH was born, and it has become an alternative for developers struggling with traditional consensuses, like Proof-of-Work or Proof-of-Stake.

PoH provides a digital record to prove that an event occurred during a specific moment in time. It works like a cryptographic clock that gives a unique timestamp to every event (transaction) along with the data structure. 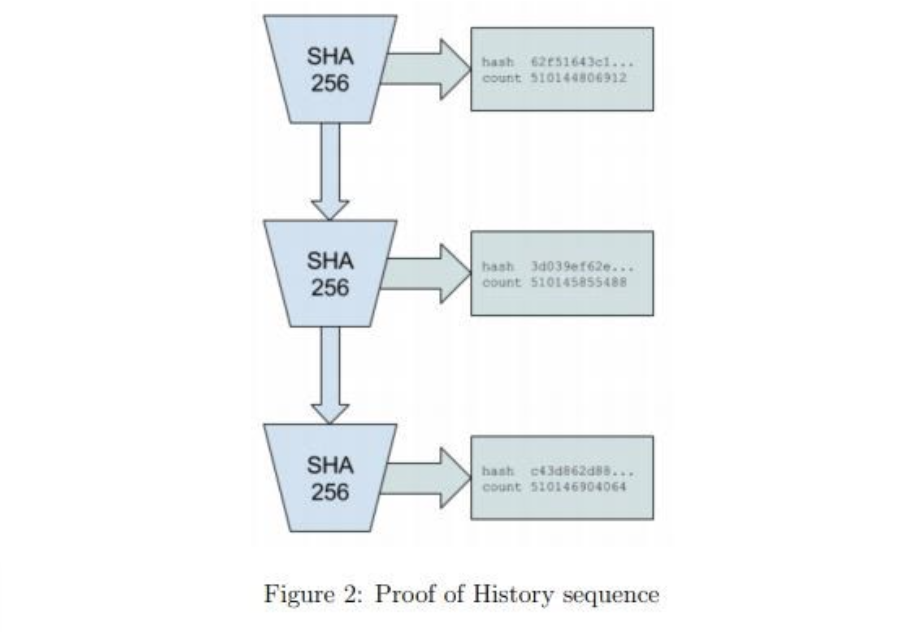 Solana claims an average block time of 400 – 800 milliseconds and an average transaction fee of 0.000005 SOL. To achieve Solana's Throughput —which the team claims can reach over 50,000 TPS (Transactions per Second), every validator on the network has its own cryptographic clock to keep track of events instead of waiting for other nodes to verify and validate transactions. This highly improves block time, making the network more efficient. 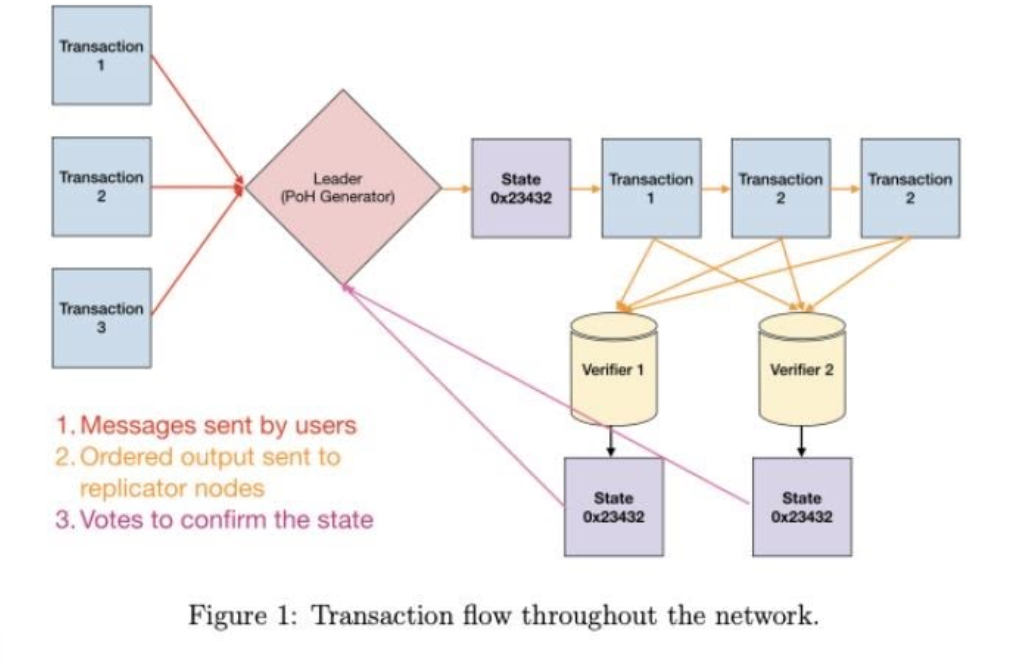 Solana does not recur to off-chain or second layers whatsoever, making it one of the few layer 1 blockchains capable of reaching over 1,000 TPS.

The Tower BFT resembles a PBFT (Practical Byzantine Fault Tolerance) consensus. The Tower consensus is a vital mechanism as it leverages the PoH cryptographic clock, allowing the network to achieve an agreement without time delay.

Turbine is a block propagation protocol optimized to broadcast transaction shreds to all network nodes using User Datagram Protocol (UDP) —establishing low-latency and loss-tolerating connections between apps on the internet.

Clusters are a set of validators working together to maintain the ledger's integrity by serving client transactions. Each cluster is a set of independently owned computers. However, clusters can coexist with others, and when two clusters share a common genesis block, they can converge.

Validators have a variety of helpful use cases for the network. They can track the possession of real-world assets, track which validators did meaningful work to keep the cluster running, and verify the output of user-submitted programs.

The Gulf Stream is Solana’s mempool-less forwarding protocol. To explain this in better terms, a “mempool” is a contraction of memory and pool, and it is a cryptocurrency node mechanism for storing data on unconfirmed transactions

DeFi projects are using Pipelining to optimise transaction validation, and Solana is not the exception. Pipelining is a common reordering technique in CPU design. It allows creating different stages for every hardware to complete its task in a process called a "pipeline of stages."

This way, all hardware in Solana’s network is busy all the time. The pipeline gives consistent loads at the rate of the slowest stage in the pipeline.

SOL Token —What is and Where to Buy?##

Solana has its native and utility token called SOL, used to pay gas fees on the network. Token holders can stake SOL to support network security and earn inflationary rewards. While on-chain community governance is not a feature yet, it might be introduced in the future, as outlined by developers.

The token was launched amid the release of the beta mainnet in March 2020. It has strived to be one of the top 20 cryptocurrencies in the market with a 272 million circulating supply, as per Coinmarketcap. SOL can be bought in almost any exchange, including Binance, Kraken, and Huobi Global —which all offer various trading pairs like SOL/BTC, SOL/USD, SOL/USDT. Buying SOL in any of these exchanges is rather simple. Let’s take Binance for example.

Solana is a scalable blockchain that aims to take a lot of the DeFi market, competing against high-profile protocols like Ethereum, Polkadot, Cosmos, Avalanche, and more. How do they compete? Everyone is trying to take a slice of the market, and each protocol is trying to do so by implementing changes, new technologies, and a better groundwork for DeFi developers.

And how is Solana any different from its competitors? Solana has a new approach to the DeFi world with a simple concept: a cryptographic clock. This decentralized clock makes a blockchain more efficient than any other concepts implemented before.

Ethereum is a decentralised ecosystem where developers can build DeFi protocols due to its well-developed infrastructure, making it the pioneer and the indisputable leader of the DeFi space, but Ethereum has certain setbacks on its mainnet that hold it back from its full potential, like low scalability, network congestion, and high gas fees (sometimes, exaggeratedly high).

While Solana it’s not a platform as big as Ethereum, it does compensate for what Ethereum lacks: high throughput and low gas fees. With a TPS of slightly above 1,000, Solana is gaining traction in the market and more DeFi projects are considering building on it. The network has 200 physically distinct nodes that use GPU power to make up for its high throughput.

However, keep in mind Ethereum is shifting to Ethereum 2.0, introducing the Proof of Stake consensus to the Ethereum network and moving away from Proof of Work. Many in the DeFi community are eager to see the launch of ETH 2.0, which could support up to 100,000 TPS with 64 sharded blockchains.

The Idea Behind Solana and Its Strong Surge in Demand##

During an interview with Techcrunch, Yakovenko said he was enthusiastic about Ethereum’s PoS shift. However, he added that even the PoS system has its negative sides. “Even with Proof of Stake —said Yakovenko— miners and bots have advanced access to transaction information that allows them to exploit users, or front-run transactions, because they can control transaction ordering.”

Hence, Proof of History was born, creating historical proof of every transaction by giving them a timestamp and getting rid of bots and miners who verify transactions on the network. This month, Solana is boosting its closing rounds in response to heavy demand, according to sources familiar with the matter, raising up to US$450 million. The project will use the funds to become the main hub for dApps.

Solana offers an open infrastructure for more widespread adoption of blockchain technology. While many are into it for the tech —and developers are loving it— some users have outlined some cons about the protocol too. Here are some of the pros and cons of Solana. Pros:

Solana still labels itself as a beta mainnet mainly due to certain bugs or minor delays that may still be present. The team has not specified when this tag will be removed. Unlike other protocols, Solana is already an operating network where several promising projects are already building on, including Solstarter, Serum Swap, and Raydium.

The protocol solves many of the classic issues regarding blockchain using high-performance technology and an advanced, hybrid system for transaction validation. It will definitely take a bigger role in the DeFi market in future years as it continues